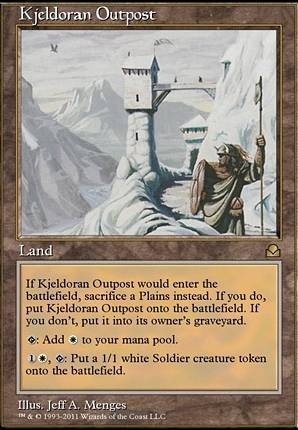 Kjeldoran Outpost occurrence in decks from the last year

Rhadamanthus on Yarok, the Desecrated + Burgeoning ...

Thanks Neotrup for finding the Kjeldoran Outpost example. That shows entering the battlefield is only the usual result of the act of playing a land, and can be replaced with another event by a replacement effect. The comparison to the Teysa Karlov ruling is also helpful.

Neotrup on Yarok, the Desecrated + Burgeoning ...

The closest ruling I could find was for Teysa Karlov:

Left you a comment, Deadpoo111. I hope it helps.

I've been thinking about this one lately, so wanted to try to get it some love. It's one of my janky builds that I hope makes people smile:

The description lays out the build philosophy. I need to pull Kjeldoran Outpost , as it isn't likely I've got enough Plains to keep it around. Always looking for suggestions and upvotes!

The deck seems light on card draw. Beast Whisperer and Guardian Project look like good fits as you have a high creature count.

A card that goes well with a token/go wide strat is Glare of Subdual to help defend or punch through as needed.

Another piece or two of targeted removal might not be a bad idea either; Beast Within and Generous Gift let you get this flexible effect in multiples.

Kjeldoran Outpost and/or Vitu-Ghazi, the City-Tree gives you a couple more options to generate token creatures. Cathars' Crusade and Gavony Township are there to make all of those tokens real threats.

You might want to get 2 more Honor of the Pure over the two Crusades, as they are mechanically much better for you in a white on white match up, though if your meta never uses white, I suppose it doesn't matter. You might also consider either Kjeldoran Outpost or Mobilization , especially as you have lots of plains in their.

Any Swords to Plowshares or Oblivion Ring s you have would probably be useful too. White has very good removal, it's a shame to not use much of it I think. Oblivion Ring is especially versatile, a real plus at dealing with control decks potentially that use non-creatures to lock you down.

zachi on brushing off the dust off ...

So im trying to get my decks up to date since its been quite awhile since I played, and I want to see what cards I need to add. I want to start with my Darien list. Some recommendations I already have are Smothering Tithe , Teferi's Protection , Blasting Station , Weathered Wayfarer , Blind Obedience , Worship , Kjeldoran Outpost , Comeuppance , Akroma's Memorial , Coat of Arms , Gauntlet of Power , Slate of Ancestry , Land Tax , Ajani's Welcome

While i agree with some of them, I'm just not sure what I would cut for them, or if they are even worth. I do have the janky urborg combo in my Darian list. I do want to try to fit the blasting station combo into Darien as well. Any thoughts on what I should do? Its been a LONG time since I have done any deck building/editing so im a tad rusty.