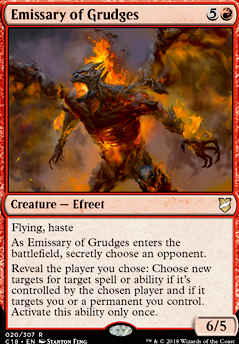 As Emissary of Grudges enters the battlefield, secretly choose an opponent.

Reveal the player you chose: Choose new targets for target spell or ability if it's controlled by the chosen player and if it targets you or a permanent you control. Activate this ability only once.

Emissary of Grudges occurrence in decks from the last year

Elsha of the Infinite
by Orin-1941 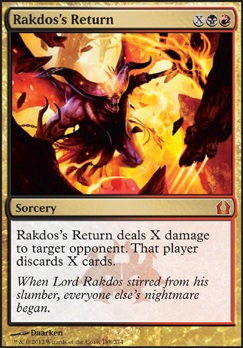 There are plenty of ways to build Etali and yours appears to be a fun one (though it is hard to make a boring Etali deck). Your mana ramp is well built for Etali and the large creatures.. which will be prone to removal..and no Etali is a bummer. Bolt Bend or Emissary of Grudges are fun ways to protect your commander in addition to what you have. Aggravated Assault goes infinite w/ neheb and is a good card regardless, lastly Crystal Ball is also a noteworthy card for those who can't afford something like Scroll Rack .

Kogarashi on Can I response to a ...

In order for any item on the stack to resolve, the players must each pass priority in turn without adding anything to the stack. This applies for every single item in the stack. They don't resolve in one bunch.

So in your scenario, here's what happens, broken down:

Your comment about "no priority for him between resolving his own trigger on the stack and mine" doesn't work. First, he has no triggers to worry about. As others have mentioned, choosing an opponent secretly is something that happens as Emissary of Grudges enters the battlefield. It's not a triggered ability (which begin with "when, whenever, or at"). It can't be responded to. It's timing is simultaneous with it entering the battlefield. Your Gilded Drake , on the other hand, has a triggered ability that must go on the stack when a player would receive priority, and then resolve to happen.

Second, currently the only thing that can prevent people from responding to a spell or ability on the stack is the Split Second mechanic, as seen on cards like Sudden Spoiling , which explicitly prevent players from casting spells or activating abilities that aren't mana abilities while it's on the stack (special actions and mana abilities are still allowed). Gilded Drake 's ability doesn't have any effect that would prevent your opponent from activating an ability in response to it.

Third, each item on the stack must resolve individually, and players each receive priority between every item on the stack. You can have a stack four items tall, resolve two of them, add three more, resolve four of them, add another, and so on, as long as players have the means to do so. The stack is not resolved in one large chunk.

Long-winded, but hopefully clears it up for you.

ElgAbri on Can I response to a ...

Boza, so my oponent is right, his Emissary of Grudges can change the target of Gilded Drake ?

Emisarry's first text block starts "as ~ enters the battlefield", meaning the choice is made right before the card ETBs.

The second ability requires to reveal the chosen player and it must be specifically in response to an ability targeting Emissary of Grudges 's controller or his/her permanents.

ElgAbri on Can I response to a ...

Ok, this is what happens in the game:

I have a Parallax Wave and there is my Gilded Drake and a Emissary of Grudges of my opponent removed with the Parallax.

In my turn, I blink the Parallax Wave , making my Gilded Drake and his Emissary of Grudges enters the battlefild again in the same time.

The abilities goes to the stack in APNAP order, Gilded Drake First, Emissary next. Resolving the abilities:

"As Emissary of Grudges enters the battlefield, secretly choose an opponent." - He chooses me.

"When Gilded Drake enters the battlefield, exchange control of Gilded Drake and up to one target creature an opponent controls." - I choose his Emissary of Grudges .

Nobody have anything to do now, than the stack beggins to resolve, and this is the problem (and the question):

My oponent wants to use the activated ability of the Emissary of Grudges (Reveal the player you chose: Choose new targets for target spell or ability if it's controlled by the chosen player and if it targets you or a permanent you control.) to change the target of my Gilded Drake for some other creature.

I say that this is not possible, because there is no priority for him betwin resolving his own trigger on the stack and mine. He says that he can.

So, what happens in this case? the trade happens or not?

Below is the rule:

Rise From Your Grave *PLZ HALP*

I think you need an Eternal Scourge for this deck.

AH HA! I finally see figured out what this deck is really needing. More punch.
Specifically, this deck should be maximizing the 'creature enters the battlefield' effects.
You are creature one or more token copies of a creature.
Those creatures should not just sit there looking at you like an idiot. Make those token work.
I know that the token come into play tapped and attacking, but by using the ETB triggers those tokens will be doing double duty.
Another thing I noticed while looking at what other people are doing with this deck is the use of +1/+1 counters to power things.
Not sure if that is a direction this deck need to go, so I'm not going to use that too much.
With that new idea in mind, lets look at some swaps.
OUT: Budoka Gardener, Charnelhoard Wurm, Emissary of Grudges, Indulgent Tormentor, Rubblehulk, Scute Mob, Scuttling Doom Engine, Seedborn Muse, Zendikar Incarnate
Not sure about: Loyal Apprentice, Loyal Guardian, Loyal Subordinate, Rampaging Baloths

IN, with no particualr order:
(I'm going to list more cards than we take out so that you have some options to consider.)
Wood Elves, note that the Forest does not have to be a basic Forest. We can fecth a dual or shock land.
Eternal Witness, to get back any other card.
Greenwarden of Murasa, another option for card recursion.
Solemn Simulacrum, land fetch and card draw ine one.
Broodmate Dragon, because dragons.
Garna, the Bloodflame, for more graveyard recursion.
Fleshbag Marauder and/or, Merciless Executioner to help control the board. We can use the sac
Jarad, Golgari Lich Lord, fattie with life draining ability.
Mindslicer, so that we can make people's lives suck.
Pilgrim's Eye, land search and flying chump blocker. the poor man's Solemn Simulacrum
Hoarding Dragon, because it never hurts to get useful artifacts.
Netherborn Phalanx, this one has always been good to me in group games. Really punishes the token player.
Puppeteer Clique, so that we can eat and exile opponenet's creatures.
Dire Fleet Daredevil, why not cast other people's spells?
Balustrade Spy, screw your deck.
Avalanche Riders, screw your land.
Sadistic Hypnotist, screw your hand.
Entomber Exarch, give us some nice options. It is a bit weak, but useful and cheap.
Bogardan Hellkite, becuase damage is almost always good. But I'm not sure about the mana cost on this one.
Molten Primordial, let's use our sacrifice outlets on other peoples stuff.
Viscera Seer, so that we can filter the top deck when we sacrifice creatures.
Hornet Queen, tokens making tokens, now with deathtouch.
Feldon of the Third Path, create tokens of creatures that don't get exiled.
Kresh the Bloodbraided or Sek'Kuar, Deathkeeper as alternate commanders and good creatures.

Not creatues but need to be in the deck:
Warstorm Surge, let's turn each token into direct damage in addition to it's ETB.
Path of Discovery, why not explore the deck?
Evolutionary Leap, I'm not sure about this one, I like the ability to fetch more creatues from the deck, but we may need more dicard outlets to really make this work for use.
Goblin Bombardment, cheap to cast, multiple uses, may help finish off the last opponent.

So, let me know what you think.
Great. Thanks. Now after helping you with this deck, I'm going to have to finish my jund deck. I'll see if I can get my list up in a couple of days.