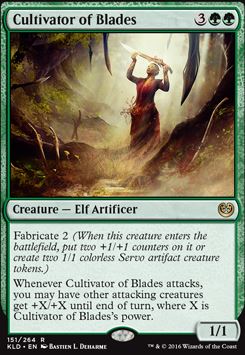 Fabricate 2 (When this creature enters the battlefield, put two +1/+1 counters on it or create two 1/1 colorless Servo artifact creature tokens.)

Cultivator of Blades occurrence in decks from the last year

Ezuri, claw of progress
by Jsquiggs 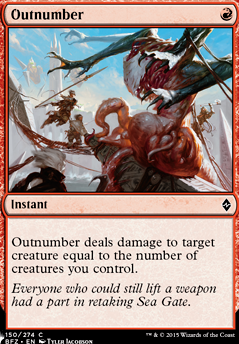 PurePazaak Well like you said, Sage of Hours lol. Other than that, Champion of Lambholt, Cultivator of Blades, Fathom Mage, and then a bunch of conditional mana dorks that can win the game with Staff of Domination like Gyre Sage, Marwyn, the Nurturer, Viridian Joiner, There is much work to be done on my list. I'm new to playing Ezuri but I like it so far. Thanks for the suggestions. I'll test them out some time.

@buttmaster420 - funny you mention that. In previous iterations of this deck, From Beyond has been included. While not exactly the same as Awakening Zone, it is very similar. Honestly, the card just didn't get in my hand very often, so I really didn't get to see it in play. Eventually, it was cut for something else.

The consistency of these two cards is nice. You know that you will get at least one experience counter every turn. That said, it isn't quite as splashy of a play as, say, Cultivator of Blades. Should it be in the deck? Probably. But I still need convincing.

Keep me posted on how it works for you! :D

Edit: After looking over my list a bit, I could see Awakening Zone taking the place of Animation Module, if I can be persuaded. ;)

There are a few interesting cards that work well with krenko- rubblebelt has a bunch of alternatives/synergy options in the form of Wild Beastmaster , Cultivator of Blades , Gruul Beastmaster , Syr Faren, the Hengehammer etc. Meanwhile, krenko has alternatives in Goblin Rabblemaster and Legion Warboss , while Hanweir Garrison can do a decent budget impression.

Mana dorks to power out three/four drops then charging in with them for a big board is a viable strategy with so little aggro in the meta.