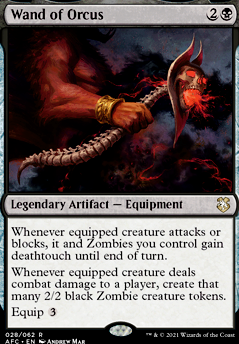 Whenever equipped creature attacks or blocks, it and Zombies you control gain deathtouch until end of turn.

Whenever equipped creature deals combat damage to a player, create that many 2/2 black Zombie creature tokens.

ê§â¢â¹Ù­Alphabet Soup Diner "We're Here to Serve You!"
by Omaux

Wilhelt, the Zombie Tsunami
by Torekai92

In the words of Shrek, "onions have layers"

In this case, everything is applied during layer 6, so time stamp is relevant. For Vizier of the Scorpion and Poppet Factory, it's a matter of which one starting doing it's thing first. If Vizier has entered since the Factory transformed, your zombie tokens will have death touch, otherwise, they will not. Now, Wand of Orcus's trigger happening during combat will mean that it will grant deathtouch, unless the Factory is somehow transformed after the Wand's trigger has resolved (as Stitcher's transform trigger happens on your upkeep, that is unlikely, but noteworthy).

613.1f Layer 6: Ability-adding effects, keyword counters, ability-removing effects, and effects that say an object canât have an ability are applied.

613.3 Within layers 2â6, apply effects from characteristic-defining abilities first (see rule 604.3), then all other effects in timestamp order (see rule 613.6). Note that dependency may alter the order in which effects are applied within a layer. (See rule 613.7.)

The result is going to be determined by timestamps with more recent effects overriding older effects. Permanents receive a timestamp when they enter. Transforming double faced cards get a new timestamp each time they transform. Continuous effects created by the resolution of a spell or ability have a timestamp of when the spell or ability resolved.

How about a Wand of Orcus in here? :D