At the beginning of enchanted player's first upkeep each turn, that player gets an additional upkeep step after this step.

For the night is dark and full of terrors
by Foocy 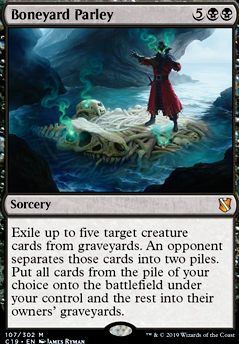 Planes Wars III: The Return of the Phyrexians
by addictedtoplacebos

Wheel of Sun and Moon is also odd for being one of only two black border enchant-player auras that isn't a curse (the other being another weird card, Paradox Haze.

Looks cool! Wish I had more advice on cuts, I have been STRUGGLING to keep mine at 100. If I had to name one, I would say keeping Paradox Haze and scrapping Teferi's Ageless Insight. It's lower CMC, most of your draw is from Zedruu so it's basically the doubling effect, and there's a slight parity break with Rising Waters, you'll untap 1 extra land. But sweet deck, might have to pop back in periodically to get some inspiration for mine :D

Why Paradox Haze? Unless I'm missing something, it only effects 2 cards, Awakening Zone and Eldrazi Monument. And since you're only running 1 of each, (one synergizing well and one not so much) isn't it a dead draw most of the time?