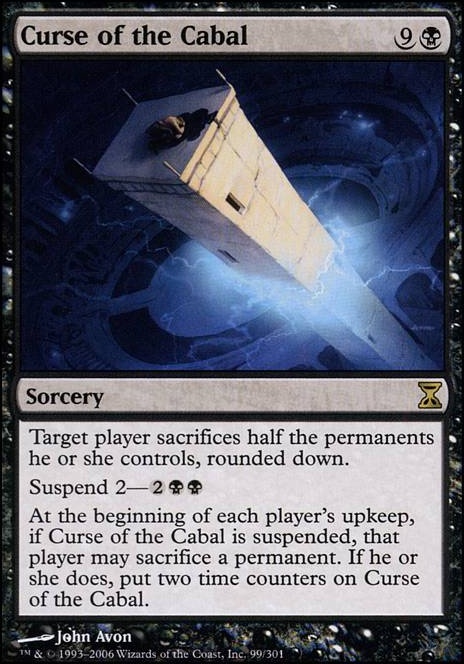 Target player sacrifices half the permanents he or she controls, rounded down.

One man's trash is another man's treasure
by JHall

Breena, the socialist Dictator
by MrCoschta

Curse of the Cabal Discussion

You might want to consider making a legacy version, since it gives you a bunch of interesting options:

Curse of the Cabal suspend it out early then hit them again from the graveyard. Especially mean after a boardwipe.

Reins of Power can take out two aggro decks at once. Play your turn then swap armies with one guy to attack another guy.

RiotRunner789 - if it's on theme I don't mind lossening up my wallet/increasing the budget for it. My typical approach to brewing is build the best most optimal deck possible; I'm trying to break that habit. I actually really like painful quandry - name and function are a perfect fit. The Curse of the Cabal is a bit on the meh side it fits but it comes in on a weird place on the curve.