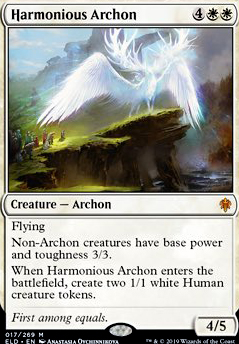 Non-Archon creatures have base power and toughness 3/3.

Personally I don't think Legion Angel does much for you since it comes back as just a 1/1 flying that does nothing interesting. It's a good card but it's not very synergistic with the deck idea so if you're not sure what to cut I would start there.

If you're worried about agro decks more than else you could just add a bunch of board-wipes like Shatter the Sky and Doomskar . You'll probably be able to get back on the board quickly anyway with Offspring's Revenge and if they're not useful, you have plenty of ways to cycle through them with Cathartic Reunion and Thrill of Possibility . You could also main-board some Heartless Act or even Eliminate with the same idea to deal with threats earlier.

Again I know it always feels wrong, but I personally would run this deck with up to 70 cards in the main deck considering the meta, so you should be able to add what you like without having to cut too much.

Personally I wouldn't play too many Harmonious Archon because it would hurt some of your creatures, and even though it evens the battlefield in a way and looks good on your 1/1 tokens, if you're against a creature deck chances are they will have some ways to get +1/+1 counters or anthem effects while you don't, so it wouldn't always work in your favor. You could swap some for something else. Actually Massacre Wurm get's a sweet ETB, could be a fine addition too, but it wouldn't work too well with Harmonious Archon ...

Awesome! See I knew I must have overlooked something. Turns out I overlooked a lot haha. I love Cathartic Reunion , Ox of Agonas , and Harmonious Archon .

Correct me if I'm wrong, but wouldn't I have to go odds if I wanted one of those companions? Offspring's Revenge is odds. Though I guess either would work as regular creatures.

I originally had Skyclave Apparition in the deck, but decided I only wanted to play hits that I could still cast without stretching the mana-base too much, but now I think it's better than Demon's Disciple . I feel like I need Harmonious Archon , so I don't mind changing up the mana a little bit in order to fit these.

What about Harmonious Archon, to level opponents' fields while retaining your own static buffs?