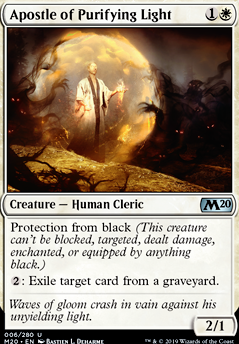 Protection from black (This creature can't be dealt damage, enchanted, equipped, blocked or targeted by anything black, and anything black attached to this immediately falls off.)

: Exile target card from a graveyard.

One Fox Makes a Big Difference
by RelinquishedAttempts

Revenge of the Spirits
by SporksOverForks

My Axe!
by vortical42

Fantastic update mate, nice to see a lot of the changes I had already made to my own version being echoed in yours. Your point on graveyard hate is interesting as I never made the switch to Soul-Guide Lantern, I instead stuck with Apostle of Purifying Light as it was fetchable of Recruiter and was more of a scalpel than a sweep. This may be due in fact to my playgroup currently being plagued by a The Scarab God tribal reanimator deck that I may have helped tune.

While Luminarch Aspirant can be good, I think it only truly shines in decks that care about +1/+1 counters. In order to get a more consistent full party and help protect against board wipes, I'd suggest playing Seasoned Hallowblade instead. Also, I'm surprised to see a UW party deck not playing Spoils of Adventure ! A 2 mana instant speed draw 3 with lifegain is absolutely NUTS, especially in an aggressive deck with a lot of low cmc creatures.

Depending on your meta, putting either Apostle of Purifying Light or Remorseful Cleric in your sideboard also gives you more clerics that work as graveyard hate, while Glorious Protector fights the blowouts Party decks tend to experience against boardwipes.