All creatures lose all abilities and have base power and toughness 1/1. 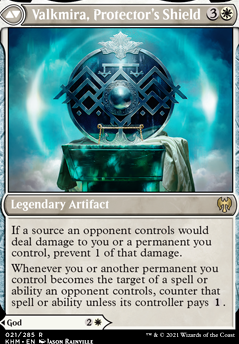 I guess it sometimes depends on luck? I playtested mine a ton and it ended up being 34 was the magic number. The mana curve is good, I need to test Toxrill as a new add, but Karn was in his spot prior.

Some advice I can offer in terms of the best walkers to run are not to run them explicitly for their ultimates, but for their control value. I think 20 is the magic number to run in terms of number of walkers.

As far as drops, I think Cultivate and Kodama's Reach are good drops, you have enough ramp without them and not enough basics to utilize them effectively. I like those for <2 colors, 3 is pushing it, 4, you aren't running enough basics. Humility might work against you at times, Atraxa on her own is a win con, I have had several games where I used the walkers for control and distraction and beat them down with Atraxa and a sword.

I like some of the combos you are running as they work with the list, though you can drop some of the pieces if you find they aren't working well on their own (when I personally run combos, it is because the cards involved in the combo work in the deck on their own, independent of the combo).

Daybound and nightbound are keyword abilities, so Humility removes them. Without the ability, Moonmist will work.

It's not the most effective interaction though, since the back face will still be a 1/1 with no abilities, and the moment they get the ability back they'll immediately switch to the current day/night state. You do at least get the Fog part of Moonmist though.

Say there's some daybound Human Werewolves and an ability removing effect on the battlefield, Humility for example. Can I cast Moonmist to transform the Human Werewolves?

To clarify since it seems you had a second question here, Humility removing the ability will not count as the creature leaving play. Your creature actually has to be put into another zone from the battlefield for that to trigger; Humility leaves it in play with modified characteristics.

Hypnox and many similar creatures have a separate second ability that's linked to the first, and that ability will be lost and will not trigger if something like Humility has caused the creature to lose all its abilities while it dies. The exiled cards will stay exiled.

Conversely, most newer similar creatures are printed like Banisher Priest, where the whole mechanic is tied into the one ability. If a Banisher Priest exiles a permanent card, then Humility enters the battlefield, then Banisher Priest dies, the exiled card will still return.

If I have a creature, such as a Hypnox, that has a "leaves play" effect, and my opponent plays a card like Humility, does Hypnox's leave play ability trigger?

If not, then does Hypnox's second ability trigger if it dies WHILE being a 1/1 creature without abilities due to humility?

Neotrup on Dress Down interaction

Fortunately it's not a new ability, and Humility has been around for a while. Unfortunately the rule I referenced was changed when Ixalan was released, so you can find plenty of forums saying creatures will enter with the counters and plenty saying they won't, and both sides were right when they said it. To this end, I'd refer you to the Wizard's page that discussed this rules change: https://magic.wizards.com/en/articles/archive/news/ixalan-comprehensive-rules-changes-2017-09-28

The relevant part being: "So this rule's changing. Now, to determine what replacement effects will apply to a permanent entering the battlefield, you look at continuous effects that modify that permanent's characteristics coming from the permanent itself along with those that already exist and will affect that permanent. Dimir Aqueduct enters the battlefield untapped under Blood Moon. Humility causes creatures with modular to enter without their +1/+1 counters. Metallic Mimic can distribute +1/+1 counters happily to your army of Ferrets under Arcane Adaptation."