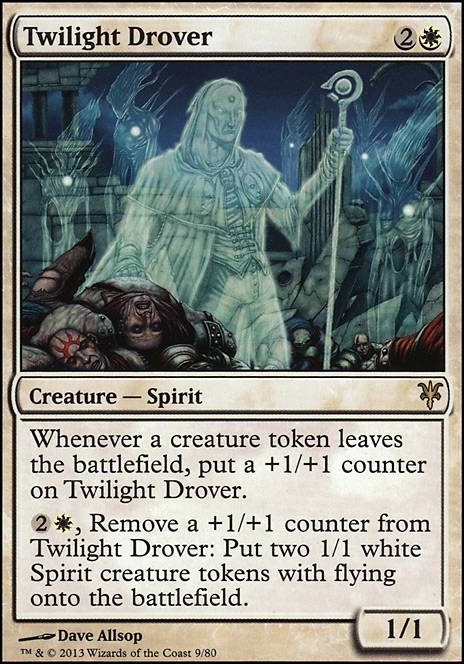 Whenever a creature token leaves the battlefield, put a +1/+1 counter on Twilight Drover.

These Filthy Hands (Ghave, Guru of Spores)
by squadcarxmar

If you want to sypport a bit the token theme you can add Young Pyromancer, Murmuring Mystic, Docent of Perfection Â Flip, Twilight Drover and maybe Sephara, Sky's Blade. As for the spellslinger theme i personnaly suggest Goblin Electromancer, Izzet Guildmage ,Ral, Storm Conduit, the new narset and Jeskai Ascendancy. For instant and sorcery other than the basics try adding spells with either flashback, jump-start or retrace.

Twilight Drover , Eldrazi Monument , Teysa Karlov , Murder Investigation , Elspeth, Knight-Errant (or any Elspeth really, they're all good for/with numbers). I have all these cards in a BW token deck that's really more a "come at me bro" deck. It has a lot of "when this creature dies" effects (so obviously Teysa is the key here), so it plays very differently than this one, but there is some overlap in the styles of play and the cards used.

Adaptive Automaton is good in any tribal, although he's a little pricey and he doesn't really fit with your theme. Lingering Souls is good, as is Twilight Drover if you play more tokens.

Endless Army of the Abzan