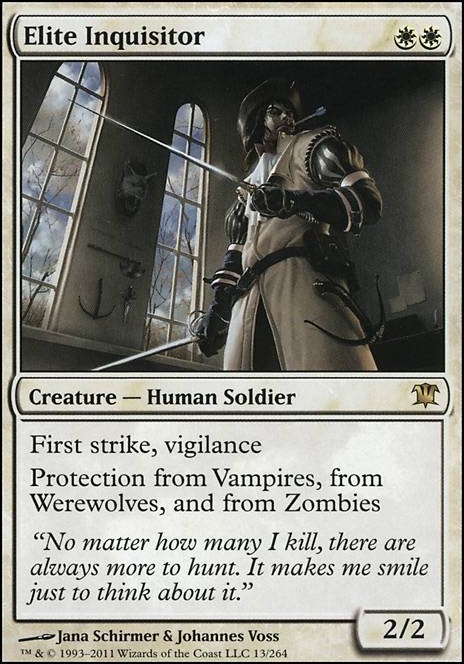 Protection from Vampires, from Werewolves, and from Zombies

When I started playing Standard, I started with Innistrad (I learned and got into it with the Dragons vs. Knights Duel deck, but didn't play a real format until the fall), and My deck was a white weenie, centered around Thalia, Guardian of Thraben (she came along later, but I have to mention her, she's so great!!), Elite Vanguard, Doomed Traveler, Selfless Cathar, Elite Inquisitor, Unruly Mob, Mentor of the Meek, Fiend Hunter, and topped by Angelic Overseer.

But the centerpieces of the deck were Champion of the Parish and Mikaeus, the Lunarch, who inspired this:

I'd like to see a Kaldheim common, considering the cards already spoiled.

Considering the few white and blue cards and Drannith Stinger being the only spoiled human, I imagine white blue will be common colors for humans. Also flavorfully, them being makes a lot of sense.

I envision humans similar to Innistrad, where the other montrous tribes basically dominate and humans have to be scrappy to survive.

Based on Elite Inquisitor:

When Vanguard Slayer enters the battlefield, you may remove two keyword counters from up to two target creatures you don't control. If you do, put your choice of two different counters on target human you control from among first strike, vigilance, and lifelink.

Protection from Dinosaurs and Nightmares

For the graveyard order matters mechanics of yesteryear Nether Spirit and Corpse Dance are the two cards I run in decks with the mechanic, but others do use it. (If no one's decks run any cards which run any graveyard order-matters cards, I think it's fine to ignore the rule about not reordering your graveyard, personally).

I also like protection from a creature type, as seen on Elite Inquisitor and Baneslayer Angel.

: Randomly reorder your graveyard, you may activate this only during your endstep.

Continue the challenge with a new tricolor combination.

+1 Exile a card from a graveyard, then create a 1/1 white spirit creature token with flying. If a creature died this turn, create two tokens instead.

+1 Creatures you control gain +1/+1, lifelink, and protection from zombies, werewolves, and vampires until end of turn.

-6 Destroy target enchantment or artifact and target creature, then search your library for a nonland permanent of converted mana cost 3 or less, reveal it, and put it onto the battlefield. Shuffle your library afterward.

A nod to Innistrad's morbid mechanic, as well as the humans versus unholy creatures theme (a la Slayer of the Wicked, Elite Inquisitor, etc.)

The ultimate is tricky, because you need to destroy both (an enchantment or artifact and a creature) in order for it to resolve and for you to get your 3-drop thing.

This was a fun challenge but in the time it took me I was probably ninja'd. If I wasn't, then I'll issue a similar challenge: imagine Sorin spending some time on Ixalan.