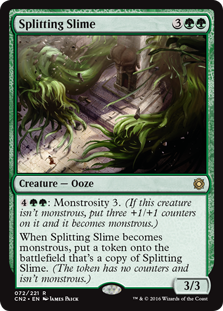 Splitting Slime occurrence in decks from the last year 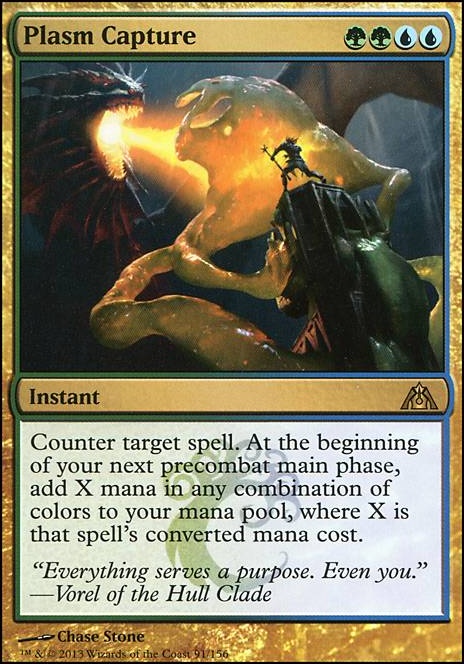 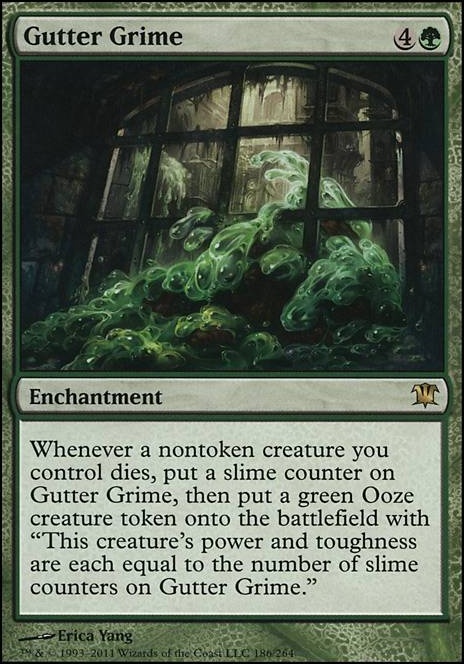 I have a couple of questions about this deck. Does the Horde ever activate Biogenic Ooze 's token creation or Splitting Slime 's monstrosity? How do you determine Gluttonous Slime 's devour?

Nice theme, and it looks fun!

The Forest Has Eyes! *PRIMER*

Burgeoning and Exploration (and others like them) are not really that good unlest your deck draws a lot of cards consistently. If you have one them in your opening hand together with a lot of lands, then they are super flashy, but they stop providing value really soon and they don't do anything else on their own. You can make a case for Exploration synergizing with Courser of Kruphix, but I still bet that most of the time they're a dead card.
Allow me to demonstrate. In this example im naming Burgeoning, but the same is true for all the other cards that just give you additional land drops from your hand and do nothing else.
Let's say your opening hand with Burgeoning looks like this.
L, L, L, L, B, X, X. and in the first three draws are X, X, L. (L= Land, B= Burgeoning, X= Some other spell)
This would be a really good opening hand for Burgeoning, maybe optimal.

In the first turn you play Burgeoning and by the second turn you have four lands on the battlefield and four cards in your hand. At this point the Burgeoning will basically stop working. On turn three you'll have five lands and four cards.

If instead of the burgeoning you had something like Llanowar Elves you'd be one mana behind on turn two and three, by turn four you'd have the same amount of mana, but by turn five and later you would have one additional mana from the elves that you wouldn't be getting from Burgeoning.
That is the best case scenario for burgeoning, if you get it mid game is mostly useless, the elves will still give mana and be able to chump block in the mid and late game.

So, does Burgeoning really deserves the spot in the deck so you can be one mana ahead in turn two and three if you happen to get it in your opening hand with the right amount of lands? (comparing to a cost one mana dork) Taking in consideration that two or more players will have to lose 40 lifes for you to win, it doesn't earn the spot. But you can get enough value out of it if your deck is made to draw a lot of cards consistenly all the time or your deck revolves around land mechanics.

At this point, the way I see it, you have three options: Jumping with both feet into the land theme, adding as much card draw as possible or removing them in favor of other ways of mana ramp. You can also do a bit of the three options if you want.

If you really want to go all in with the land theme, you could keep all the "additional land drop cards" (not Burgeoning) and add Oracle of Mul Daya for more land from top of library and Ramunap Excavator to reuse your fetchlands from the graveyard over and over and then your additional land drops would always be spent. If you were to add the Ramunap Excavator then I would also add Evolving Wilds and Terramorphic Expanse or other lands that enter untapped and you can sacrifice without paying mana like Ghost Quarter. Everything I said about the Ramunap Excavator is also true for the Crucible of Worlds, which I don't like to recomend because it's way too pricy for me.

Even if you decide to remove the land drop pack, your deck could benefit a lot from more card draw. Commander games most of the times are an endurance race and the guy who ends up running out of cards and is relegated to one draw each turn, is the most likely to lose. Currently you have as reliable card engines Garruk's Packleader, Elemental Bond, Garruk, Primal Hunter and Lifecrafter's Bestiary. I'm not counting Selvala, Heart of the Wilds, Vizier of the Menagerie, Courser of Kruphix, Zendikar Resurgent and Freyalise, Llanowar's Fury because I don't think they are reliable enough or in the case of Zendikar Resurgent it's too late-game, more like a finisher by itself (you kinda enter in god mode) than a mean to get to an end and if you get to put it on the battlefield but your hand is empty, it will be of little help to you. I'm not saying these cards should go out, I like all of them and I run them in several decks, it's just I can't count them as card draw.
I would add about four to chose among these (I find that at eight card draw engines the decks starts drawing cards consistently) Hunter's Insight, Life's Legacy, Greater Good, Momentous Fall, Hunter's Prowess, Soul's Majesty, Rishkar's Expertise, Mouth / Feed, Shamanic Revelation, Regal Force (I'm not really a big fan of this last one but maybe in a mono green works fine).

If you decide to remove some or all of the land drop cards you can add instead Overgrowth, Worn Powerstone or Thran Dynamo as a bit heavy but efficient mana rocks and Birds of Paradise, Wild Growth or Utopia Sprawl as first turn rampers.

To get some extra juice from Seedborn Muse and Elemental Bond you could use Splitting Slime.

Instead of (or maybe together with) Elvish Piper and Quicksilver Amulet you could use Champion of Rhonas (bigger body matters) and Deathrender (it's actually doing something useful while you don't have big creatures in your hand and also, mitigates the damage caused by board wipes).

Sorry for not formulating the proposed the changes as "card-A for card-B" like you wanted, but it's not always that simple. Maybe I see a card more useful than you do (or the other way around) because our respective metas are different.

Yeah, there's actually a lot of creatures that can swing for 2 on turn 2. Just off the top of my head, Kird Ape, Loam Lion, Wild Nacatl, Goblin Guide, and Cerodon Yearling. I play in a pretty aggressive playgroup though, I doubt EDH players or Modern players run into these sorts of cards all that often.

And I loved Monstrosity, definitely one of my favorite mechanics. It doesn't tend to scale as high as Level Up, Figure of Destiny, or Warden of the First Tree, but I love the instant-speed activation and some of the specific cards they built with it. Splitting Slime is one of those cards I have a personal crush on, and try to work into every deck I can, and if I ever get into EDH, I'll have to build around Hythonia the Cruel.

In general Genesis Wave is a good one for decks running green. If it is going tokens Ant Queen or Mobilization are fun choices. Jazal Goldmane works for stompy decks, and Splitting Slime is just hilarious. Walking Ballista can kill the board if used right with enough mana. Omnath, Locus of Mana is also a fun one. Heroes' Bane is one of the better hydras in edh. Staff of Domination works in literally any deck but I'm guessing that as a selesnya deck it won't be too amazing.


Trying to further lower curve and shift away from artifacts to monogreen.
Splitting Slime left for Soul of Zendikar. The two fulfill more or less the same role, changing where you pay the mana (Slime more pricey overall), but Soul changes out bigger tokens for reach, which is more important since this deck has issues with fliers.
Kuldotha Forgemaster was ok, but Yisan should give better returns, though without a real way of manipulating the counters, he only gets one run through the chain. The activation cost should also be easier to deal with especially given the shift away from artifacts.
The remaining five cards simply didn't seem to be pulling their weight, so were changed out for draw, more ways of dealing with flying, and evening out the curve for Yisan, providing a second option at both 1 and 4 CMC.
×