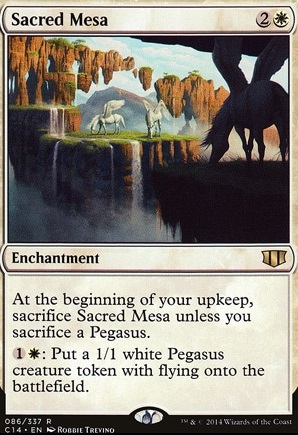 At the beginning of your upkeep, sacrifice Sacred Mesa unless you sacrifice a Pegasus.

: Put a 1/1 white Pegasus creature token with flying into play.

Sacred Mesa occurrence in decks from the last year

I have bit to say about your Zirda deck as a fellow Zirda deck user. Some of your reasoning confuses me, but you do you I guess. Also, I suck at wording some things, and I don't want to explain everything, so I'm sorry if I sound rude and stuff. I understand that you won a game with Brion Stoutarm, but I don't think it really fits your deck. Evra is the only card in there that seems to work with it, but even then it's sorta iffy since Zirda doesn't interact with Brion either. You don't have any tutors in your deck and that means that you can't make consistent board states, at least in this context, meaning Brion could just be a wasted slot. I don't really understand your deck that much. It seems somewhat focused on doing some sort of aggro-ability strat where you make tokens and stuff, but I think that you can do some more interesting things, but I guess that just comes from the fact that I am more of a control player than an aggro player. However, some cards that you should look at to help your strat are Dawn of Hope or Sacred Mesa (instead of Custodi Soulbinders). Custodi kinda just is entirely out-classed by Dawn of Hope and Sacred Mesa because the latter two are enchantments that are harder to remove than creatures and aren't based on counters and have a cheaper casting cost. Gerrard's Battle Cry would be really good too. Looking at your deck, your group probably doesn't have much board interaction, but you should add some(kill/destroy spells and stuff). I don't know how my Zirda deck would compare to yours in an actual game, seeing as to how you have some cards I wish I had(I ain't that rich) and we went down different paths, but I like mine more (obviously I guess), I don't fully understand my deck either, but I think it's mainly about value, though I have some stupid things in there because I thought of doing some sorcery damage stuff but that is pointless and doesn't synergize with Zirda or the rest of my deck. I used to have Basalt Monolith too, but I also took it out because it was cheesy. If you were to look at my deck, it isn't what I want it to be because I just ordered cards and I'm not going to update it until I actually have them, but I don't know. I just think your deck is somewhat strange. I need to improve my deck too. Writing this comment makes me feel really scatterbrained because the entire time I was trying to think about your deck and my deck and if I should talk about some cards you should remove or not. In any case, good luck out there.

-1 Swords to Plowshares +1 Path to Exile

This change is minimal but I have been facing many ramp decks recently and the lifegain from Swords to Plowshares has been more relevant than I like.

Sacred Mesa can be a powerhouse but as the commander format continues to speed up it never seems to do enough when I get it into play. I have replaced it with a card that should have been in my deck years ago.

I can see Wolfbriar Elemental finding its way back in the deck if it becomes more focussed on generating large amounts of green mana. However, for now it is the casualty of Tooth and Nail which makes this deck more consistent and allows wins on the spot by grabbing Craterhoof Behemoth & Avenger of Zendikar

The pridemage is easily tutorable removal in a deck with limited interaction. I found myself holding mana up for Fresh Meat that often would go unused when the wrath I was playing around never came. This change helps improve one of the decks overall goals of being more proactive.

I hate to see llanowar go but he's low impact and Concordant Crossroads is the opposite, allowing the decks combos to go off immediately and win before opponents have a chance to react. It is to be saved only for winning the game as it also gives your opponents haste.

Grind , Luminarch Ascension is a perfect fit for this deck,I just need to get one first. Same goes for Magus of the Moat. Hes about the only non-flier I could justify having in here. Sacred Mesa fortunately is already in the deck. Thanks for compliment and upvote!

cool deck!
thoughts about Luminarch Ascension over Sacred Mesa?
also i know it doesnt have flying but really Magus of the Moat seems like an mvp here