(Green): Target land becomes a 1/1 creature until end of turn. It's still a land. 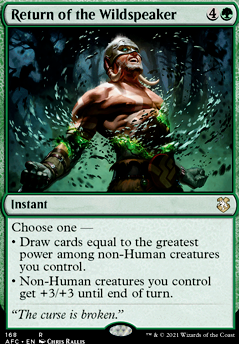 Having run other big green mana commanders, Command Beacon can help when your commander gets countered/killed. Road of Return does the same and also gives you some utility to boot! An early Geode Golem could quickly ramp and get out of hand!

On the jank/spicy side of things, if you chose to go more of a counters direction in terms of making the most treasure as possible, Helix Pinnacle MIGHT work. Kamahl, Fist of Krosa and Kamahl, Heart of Krosa are both mana sinks that can produce "creatures" and give needed trample boosts to your creatures. Biogenic Ooze Splitting Slime and even Centaur Glade are all ways for you to use the treasure accumulated from combat damage to produce even more creatures (admittedly not on a 1 to 1 level, but pretty dang cheaply)!

My first edh deck was Kamahl, Fist of Krosa because I read the odyssey series novels and loved his character. I was new to the format and didnât know yet how to properly form a deck. Fast forward about a year to the M15 spoiler season when Yisan, the Wanderer Bard got spoiled. I fell for Yisan immediately, and transitioned my Kamahl deck into a Yisan deck. Very few of the cards are the same at this point in time. I was quite happy with my Yisan deck because I made it on my own (I donât think edhrec was a thing yet) and quickly gained the ire of my former play group

KingLucio on Is there any printed way â¦

Thank you for the Ideas guys! Neotrup I own Multani, Yavimaya's Avatar , I just didn't fall in love with the card Multani, Maro-Sorcerer has just always been a favorite card, that and Kamahl, Fist of Krosa are probably my two favorite cards of all time. Multani just always looked awesome on that card, and the flavor text is my second favorite to OG Raging Goblin .

After seeing Mitch's Commander Quarters video on Kamahl, Fist of Krosa land destruction video I immediately knew I want to make 5 mono colored decks that do something that color isn't known for!

This is my green deck: https://tappedout.net/mtg-decks/kamahl-mono-green-land-hate/

This is my red deck: https://tappedout.net/mtg-decks/starke-mono-red-enchantress/

I know I want to go Aristocrat mono blue but I have yet to decide what I want to do with mono black.