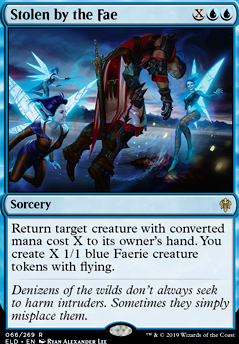 Stolen by the Fae

Architects of Law
by DrSnipy 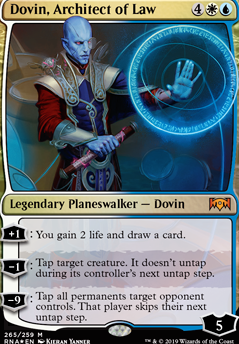 Stolen by the Fae Discussion

Tinnuki Thank you! I definitely will! Love seeing what others do with their decks with commanders I also use.

I totally forgot about Stolen by the Fae , have a few copies of it too. I think I might have had it in this deck way back when I first built it but took it out because the deck was running too slow. A lot of the tap lands have been replaced so I think it's time it can go back in again. Coat of Arms is a card I'm currently borrowing from my partner for my Bat Tribal deck (which badly needs it more lol), but eventually I will get a copy of that for both Bats and Faeries. :)

Kindred Dominance and Kindred Discovery would be amazing additions, hopefully they get some reprints soon! Pretty much any time lately I've been spending more on a card (anything $10-20+) I've been trying to get various desired reserve list cards knocked off the list first (which I am really glad I did for Liege of the Hollows and Deranged Hermit for a different deck because those spiked like mad recently).

Faerie Tauntings could come out to be honest, I had it in here since it was a cheap enchantment that would trigger Alela's ability and because it was on theme. Unless Vedalken Orrery is out, it really doesn't do much.

Thanks again for so many suggestions! It's quite helpful to have another pair of eyes for a fresh perspective, much appreciated!

Cool Faerie tribal! I have a faerie-based Alela deck as well, although mine is much more of an enchantress deck than yours is. Feel free to check it out!

Couple suggestions: I think you'd enjoy Stolen by the Fae for some easy tokens, and some more tribal glue like Coat of Arms (or perhaps Kindred Dominance or Kindred Discovery if your budget will allow it) would be nasty in a deck like this.

One question though, as cool of a card Faerie Tauntings is, I feel like you don't have enough instants or flash cards to truly take advantage of it. Am I just not seeing a secret synergy somewhere?

Stolen by the Fae OUT Introduction to Annihilation IN

While the theory behind Stolen by the Fae is solid- removing a problematic creature while leaving evasive, ninja-enabling faeries behind, I've never found it to be great in practice. Introduction to Annihilation can remove anything, including enchantments and artifacts that Dimir has trouble with, while also doing a solid five damage to each opponent if I draw it off of the top.

Gravitational Shift is offense and defense.

Lightmine Field looks like it kills your fairies. That's my second favorite flavor text in the game though.

Notorious Throng and Stolen by the Fae

Helm of the Ghastlord maybe?

If you put in Cathars' Crusade a combo-wincon would be Dovescape. Not fairies but they are flyers and you have some flyer buffs already. You just need to make sure yours are bigger than theirs.

Hello stranger, I have combed through your deck and found some cards that could be exchanged for more synergistic or effective alternatives.

Aether Swooper is a small flyer that uses Energy to create 1 non flying token. The use of energy is exclusive to this card, so functionaly it will create a token once, the first time it attacks, if it lives that long. Instead I would suggest cards that can create multiple tokens that also have flying. For example Cloudseeder will synergize with your graveyard cards such as Cadaver Imp, Zombify, and Ghastly Demise. Skirsdag High Priest fills a similar place and Stolen by the Fae is a removal spell that also creates several flyers.

Aetherborn Marauder relies on +1/+1 counters. The challenge here is that only 3 other cards in the deck create +1 counters and one of them can just put it onto the maurauder. There are better options fort Flying Lifelink creatures that cost equal or less mana and can create more synergy for the deck. Some examples are Nighthawk Scavenger, Taborax, Hope's Demise, and Vampire Nighthawk