: Scry 1, then reveal the top card of your library. If it's a land card, put it onto the battlefield tapped. Otherwise, draw a card. 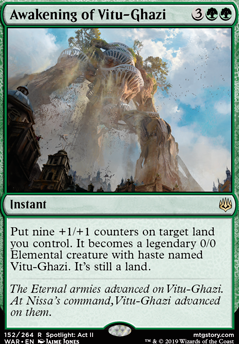 hejtmane on Nivix Guildmage as a second â¦

You be better with Thrasios, Triton Hero as a mana sync cheaper to cast and get on board; generic mana from the activation ability get to scry; put lands onto the battle field and if no land draw. Just saying better outlet plus better utility even without the infinite mana sync

b0bjohnson - I have a few ideas. The main commanders I'm looking at are Lord Windgrace and Thrasios, Triton Hero + Partner, maybe Toggo, Goblin Weaponsmith or Kamahl, Heart of Krosa.

There aren't any good commanders that tutor like Golos, so I figure the commander needs to give the deck a win-con outside of Field of the Dead or Valakut, the Molten Pinnacle. Thrasios churns through the deck and leaves room for a partner so that's what I'm focusing on the most.

I'll make a deck list public if I come up with anything good!

StopShot on How to make new 2-color â¦

@1empyrean, My bad, I felt like it was redundant to rattle on about something I thought there was a consensus on, but I'll take your comment as asking, "what's so bad about having 4-color partner pairings?"

I have my own negative opinions about the subject, but one of the two things I can point to outside of my own views is that dual-color partner commanders can be found on the upper tiers of any given commander tier lists which I believe says a lot about the community's perception of them.

Its rather hard to find dual-color partner commanders such as Thrasios, Triton Hero, Tymna the Weaver and Vial Smasher the Fierce on the bottom of any list if at all and most of the time they're placed so highly because they have the capacity to become stronger over time than most other commanders. If you have a low tier commander and a new card is printed that really boosts that commander's potential, it likely won't be enough to boost them to the next tier because that new card is put into a deck of 99 cards where it likely won't be drawn most of the time. In order to make it to the next tier bracket a considerable number of effective cards have to be printed to change out any particular general's standard decklist. It also should be stated that if a new commander is printed that outperforms the older commander that can instantaneously lower its standing on the tier list, because why would you run that commander if a better one exists? Partner commanders are different in that the number of cards needed to reach the next bracket is one, that being if a new partner commander is printed that increases the potential of all the others, and since that new card is being put in your commander slot you can expect to see it every game and having a better commander in slot can make the rest of your cards in the 98 also synergize better with it than before or provide alternatives card switches that you wouldn't be able to make before. And of course a better partner commander can make another inferior, but unlike the last example it makes the other half of your commander all the better unlike making the whole thing a waste. And of course you can argue that's a problem with the Partner mechanic itself and has nothing to do with running a 4+ color deck, but I would argue it does because if you're running a 4+ color pairing it becomes much more difficult to replace one of your commanders if only single color partners are being printed to contest one of them. You could have a single color general actually be a decent upgrade to one of your dual-color ones, but then you'd also have to consider slotting out all the cards that make up the color you would be losing for possibly more inferior cards in return which results in a much higher barrier of entry and is a big reason why color, especially running +4 color matters a lot regarding power with the Partner mechanic.

And my second point further backs up that notion. C16 came out November 11th, 2016 and since then Wizards has not been eager at all to expand upon the mechanic itself as I think they even know +4 color partners pairings are too strong. Battlebond came out June 8th, 2018 where they introduced "Partners with" which is a straight downgrade to the Partner mechanic where EDH is concerned. You could give any of the "Partners with" commanders Partner and it wouldn't hurt their ability to perform together in an EDH environment as the tutor effect is meaningless if both of them are your commander, but perhaps you could say this wasn't a downgrade caused by 4+color partner commanders but that Battlebond was meant to be a two-headed giant set and not an EDH set. I would even agree with that, if not for Commander 2020 which was scheduled for release April 24th, 2020. As an EDH centered product we again returned with the "Partners with" mechanic as if Partner itself had become a taboo keyword yet the concept itself was still worth pulling up again. To me it feels obvious Wizards is behaving as if they made something busted and was trying to dial it back. ~2 years after C16 they test dual-color partners-with and then after reviewing the power level they inch it up ~2 years later with tricolor partners-with commanders almost as if the two-commander mechanic was something they really wanted to work with, but the number of colors was the inherent problem that needed balancing.

Commander Legends came out half a year after Commander 2020, November 20th 2020, 4 years and a week later after C16 before deciding to return back to Partner itself in a draft environment in probably the most awkward fashion possible if you think about it. In Battlebond's draft environment they made it so if a pack would contain one of the Partners-with commanders it would always contain the other and that your team would pick two cards at once before passing the packs. The exact same thing could have been implemented in Commander Legends, every pack would have a dual or triple color pairing of partners-with and you could pull them both before passing the pack. But if not Partners-with surely it would have been better to make dual-color partners in a drafting environment. If you needed a color you'd be more likely to find it on a wide selection of dual-color partners than would be the case for the number of mono-colored ones and it would be far less punishing if you ended up drafting too many cards away from your main two colors as well given how color-restricting the EDH format can be. Surely mono-colored partners and the time it took to revisit the mechanic after numerous watered down attempts paints a pretty clear picture. Heck the C16 partners have 2 cycles for enemy color partners and 1 cycle of allied color partners, so at bare minimum there would be an incentive to make an extra allied set to balance off that difference and it seems like even that was too questionable to put in Commander Legends despite embracing the Partner mechanic heavily in that set. Perhaps Wizards felt like they already printed that second cycle of allied partners in Commander 2020, but I don't think any of the players feel the same way about that. Clearly all the mono-colored partners wouldn't have been printed if Wizards felt the new 3-color pairings they would have made with the C16 commanders would have been a problem as they could have just given the set the Battlebond treatment by making them all partners-with and having the drafting rules be just like how they had it in the recent Double Masters that had came out a few months before it.

Thanks Herudur, I appreciate it!

I think that Isochron Scepter works best in two kinds of decks: A midrange commander deck such as Kess, Dissident Mage that wants to play the long game and out-value their opponents, or a combo deck with an infinite mana sink such as Thrasios, Triton Hero which can capitalize on the Isochron Scepter+Dramatic Reversal combo.

When I'm playing Yuriko, I'm ideally trying to win by turn 6-8. So I typically can't spend 2 mana to cast Isochron Scepter and hold up another 2 mana to use the spell that's imprinted on it. I also don't have a way to win the game after making infinite mana from Isochron Scepter+Dramatic Reversal. So although Isochron Scepter is a very powerful card, it doesn't fit that well in the deck.

I hope that was clear :) thanks again for leaving a comment!

Necrosis24 on Will Triskaidekaphile Become a New â¦

Omniscience_is_life I think itâs the fact blue has access to so many card draw/discard effects it isnât hard to curate your hand to 13 cards. Also the card has built in card draw so you donât even need another card draw source just infinite mana and a couple counterspells in hand for protection. I think they way it plays is somewhat comparable to how Thrasios, Triton Hero is used.

But as you said it will see play but not staple worthy. I can see it in an Atemsis, All-Seeing deck.

At present I run a Thrasios, Triton Hero / Tymna the Weaver combo control deck: Triton Weaver, however having access to red (for haste effects and a few key cards) has always seemed like a decent idea.

For a while now I have pondered about if Kenrith, the Returned King would be a better commander for the list. I have put together a WIP list here: Hail to the king, baby which is very similar in concept but takes advantage of a few key red cards.

The biggest selling point for Kenny has been than he adds red. But at the same time the biggest drawback has been that you need blue mana for his draw card (one of the big pros for Thrasios).

So I wanted to get peoples' thoughts, which one do they prefer and why?

One of my early EDH decks was Jenara, Asura of War and I had the deck be mostly control with ramp and force multipliers to speed things along.

I love combo, but this deck makes me nostalgic for that deck.

I'd like to see more uses for Training Grounds , as it currently only interacts with Stoneforge Mystic and Thrasios, Triton Hero .