Put target face-up card that's removed from the game into its owner's graveyard.

Pull from Eternity occurrence in decks from the last year 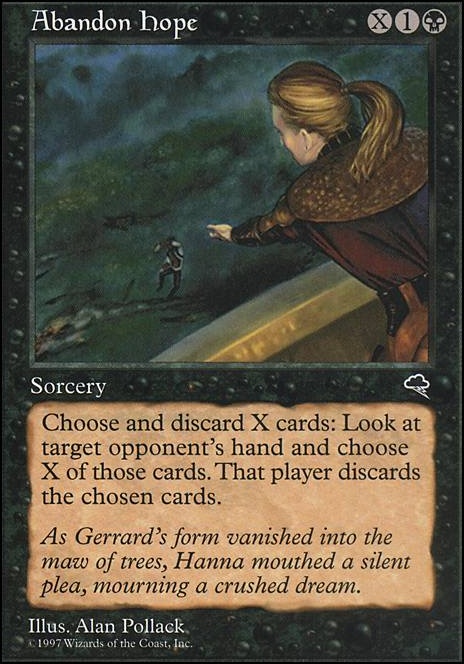 mericci815 Pull from Eternity or Riftsweeper can be helpful if you face that card a lot. Just a suggestion. Otherwise, alt win-con here is Laboratory Maniac .

I would recommend Pull from Eternity as a way to get back things from exile very useful in both the storm game and as a way to rescue lab man.

Merjan1 I built a very similar copy of this deck about a week ago. As far as I can tell, the current win-con is to copy as many "cast instant/sorcery spell, opponents take damage" creatures as you can ( Guttersnipe , Electrostatic Field , Firebrand Archer ) with cards like Quasiduplicate and Cackling Counterpart , then activating recursion with Pull from Eternity and Sevinne's ability stacking several times.

The last time I played, I won by playing Quasiduplicate on a Guttersnipe, then casting it from my graveyard as my first spell (and also casting Increasing Vengeance for value). Used Pull from Eternity to get Quasi back in the bin, cast Time Warp and basically did it again for lethal. Other than that, I've had times where I've had +8 turns and done basically nothing because I was digging for an answer every turn. If I had to guess - this list probably uses Devil's Play and Ral, Storm Conduit to deal damage, but I wouldn't be opposed to putting in Storm Herd or Molten Disaster or something to just boost my ability to win properly off Thousand-Year Storm .

First of all I like your explanation of the concept and detailed step-by-step highlighting cEDH weaknesses and how to attack them, I like to build decks with a few backup win-cons or have multiple recovery cards. However I am less convinced how this deck can win more than any other cEDH decks that are fast, consistent, though may have some obvious weaknesses.

Q1. You claim that Extract and Praetor's Grasp are efficient way to "destroy" a cEDH deck, but how do you handle 3 opponents that have total of 6 or more cards serve as win-cons (assuming each player has at least 2 lines of win-con with different sets of key cards) that you need to remove from the game to stop them? For example, if you were facing against my FC sliver, even you cast both spells on me I don't know what cards you can exile to keep me out of the game. I run FC and Jace forbidden tutor combo and both Riftsweeper and Pull from Eternity plus some graveyard recursions. Unless you can Praetor's Grasp me twice, I can nullify Extract effect by using either one of the two bring-back-from-exile cards.

Q2. You have multiple win-con lines which is how I used to build decks, after years of experimenting I figured it's actually less likely to win against a more focused combo deck because you are sacrificing your own speed and consistency for value cards and disruptions. In a 1v1 this will be a better deck-building, but in a multiplier game all you need is to slip through your combo once to win, which in my opinion is much easier than stopping EVERY combo winning line opponents try to execute.

I am a control player myself. I love the cards you mentioned in the deck that I really want to put into my cEDH deck, but honestly I don't think they do enough to disrupt the table where starting turn 1 every opponent can threaten to win. That's why I build "lower power level" yet competitive decks so I can play those cards.

dingusdingo on Once upon a Time - ...

I've had a few days to think more about this card, and I think that every single person in this thread missed the most absolutely busted part of this card. It gives a huge advantage with mulligans, especially with the new London Mulligan

Once Upon a Time serves as the missing link in whatever you need during mulligans. It provides immense flexibility because it hits multiple useful card types, and even if you mull down to 1 you're still seeing more cards than an opponent who has taken 0 mulligans. With former mulligan rules, OUAT would see you the same amount of cards when you mull to 2, and less if you go to 1. With the London mull, you're always going to be starting the game having seen 12 cards deep into your library no matter what how many mulls you take

I believe this card will either become restricted in Vintage or cause the restriction of Bazaar of Baghdad . I don't know how it will impact Modern, but the card it will probably be run alongside Serum Powder is also Modern legal.

Let's take a peek at Serum Powder with the new mulligan. Before you use Serum Powder , you get to decide which cards from your hand go on the bottom of the deck. After you've taken a couple mulligans, seeing a Serum Powder means you get to make choices about card selection and deck size on turn 0, and you get to follow up with turn 0 filtering with Once Upon a Time . It would also be possible to exploit Serum Powder with Pull from Eternity , which would be a Modern Entomb if used properly. Another thing to note about the Serum Powder usage is that the cards are exiled face-up, meaning it gives you information about your future draws and draw chances (read:more info about your odds to draw combo/hit with OUAT).

To put it more succinctly, its possible to build a deck that exploits mulligans and performs better after taking mulligans.

I think the new mulligan in tandem with OUAT and Serum Powder gives a very large margin to be exploited. Giving up 1-2 cards in hand but having a 50 card deck with a 10 card wishboard while having higher card quality than your opponent could very well make a splash. In Modern I see this being used in a value/grind situation, with Dark Confidant to recover from mulls and Tarmogoyf being a reliable cheap beater, and Snapcaster Mage for value removal/reusing OUAT. I do think that the vast amount of information and choices that are made on turn 0 that there is the potential for another Hogaak situation, with an incredibly dominant deck emerging rapidly and requiring bans.