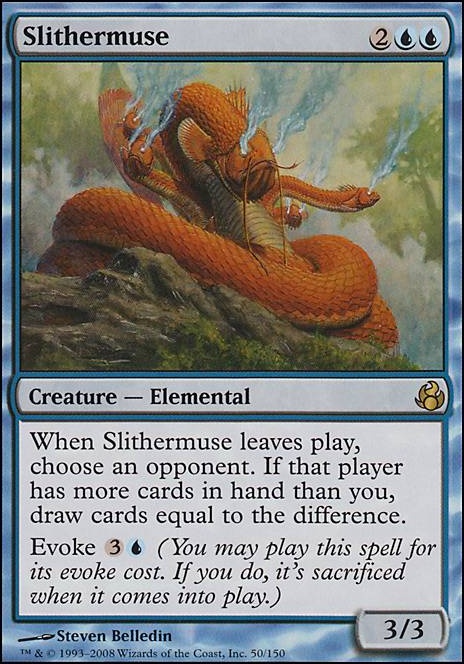 When Slithermuse leaves the battlefield, choose an opponent. If that player has more cards in hand than you, draw cards equal to the difference.

Evoke (3)(Blue) (You may play this spell for its evoke cost. If you do, it's sacrificed when it enters the battlefield.)

Slithermuse occurrence in decks from the last year

Animar storm on a budget
by Mastadontti

Who needs Profit of Kruphix anyway? (cEDH)
by bigdaddymauRice

Because Who Doesnât Love ETB Effects!?
by Feebs24

It is great to see more Omnath, Locus of the Roil decks popping up! It looks like your deck list is mainly focused on the Tribal play-style, will a small splash of Landfall. It seems like the other couple ways I have seen this commander go is abusing ETBs and also doing some classical land recurring stuff. I for one already have an Omnath, Locus of Rage deck and a Lord Windgrace so I decided to leave the landfall stuff in the background and focus more on the ETB effects and Tribal.

Have you looked at Flamekin Harbinger , Mulldrifter , or Slithermuse ? All great Elementals! Please fill free to checkout my deck!

@F0rtepwns Thragtusk was already in there, Dual Nature seems a bit off plan considering the aristocrats nature of the deck and how that exiles tokens rather than making them die, and Slithermuse looks to fit in well. Thanks for the suggestion.

P.S. I have no idea how @ing someone is supposed to work on this site so... Yeah whatever.

No problem goldlion! You know your meta the best!

Yeah the meta I come from is super high paced and competitive so everything that comes in mind is all about efficiency, disruption, and protection.

In regards to your response, as I said earlier you know your meta the best, I personally don't like one time use effects for long term board state as I like the reuseability of an effect more than burst advantage unless the burst advantage gives an overwhelming board state. I see your reasoning behind most of the cards I selected to consider taking out. If you are worried about indestructible and hexproof creatures, luckily enough we do have answers for them. If they aren't hexproof here are a couple suggestions.

Now for the hexproof creatures, well we only have a couple ways to deal with them. First and foremost is mass bouncing like Evacuation , another way to deal with them is to use cards similar to Reins of Power to steal their creatures and than get rid of them. The alternative way is to run effects like Arcane Lighthouse to make them lose their hexproof so that you can target them with removals. Other than those the only way is countering them, but since you are only able to run three of them that is a low percentage.

For your shuffle effect since you are gaining a lot of mana, it's not really a budget option but the Eldrazi's are an option to prevent yourself from milling out or reusing cards again. I would recommend Kozilek, Butcher of Truth as he provides CA as well as shuffle effect.

Now for the next part... Prophet of Kruphix is broken, since you are able to play with it again. Use her to your heart's content. It is why I said it will be beautiful with Deadeye, you can use more effects that abuse ETB or LTB triggers. Cards like Mystic Snake will gain more value and be able to be reuseable as long you have open mana. Slithermuse also is fun this way in conjunction with your Psychosis Crawler . The worrying part on your curve also wouldn't matter as 6 CMC for a card that does give you advantage shouldn't matter as also you have access to flash from two sources and you also play in a slower meta.

Lastly, Pemmin's Aura is an absolute house imo. Giving it protection as well as pump and tap/untap abilities all on one cards is pretty bonkers. The thing I love about it the most is that it gives your creature shroud on demand, and if your opponents have multiple kill spells you can also in response activate it as many times to protect itself.

How is Slithermuse not a more popular card in Aminatou decks? Only discovered it today and Wow...just Wow.

Anyway, I've been playing Amin for months now and the deck is finally to the point of being able to hold it's own against 75% level decks. Some friendly advice

1: You need to be playing Lavinia of the Tenth and Stonehorn Dignitary

2: You need to drop your average CMC by at least .75. Mine was too slow at 3.81, which is significantly lower than your current build. Once I lost some of the vanity cards (side-eyes Yennet) and played lower cost spells it was much easier to control the board using ETB triggers from blinks. When cutting cards ask yourself "is it removal? Is it card draw? Is it ramp? Does blinking it do anything?" if the answer is no, cut it.

3: You need a win condition. Maybe I'm missing something but I don't quite see what yours is other than maybe swinging with flying beaters.