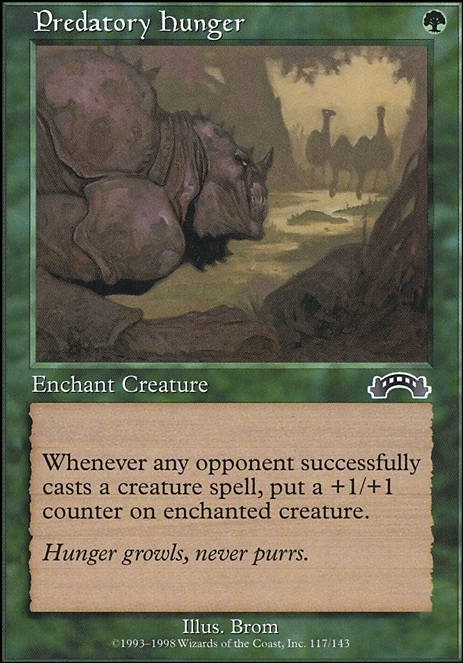 Whenever an opponent plays a creature spell, put a +1/+1 counter on enchanted creature.

Why is this card legal?
by Mtg_Mega_Nerds

Thank you for your comment. Predatory Hunger is one card i will put in the deck. Seems really strong with Hallar. For Lightning Greaves i did not put it in on purpose because of the shroud. I have other protection spells also with kicker instead of. I do not want to have a situation where i put a lot of +1+1 counters on Hallar but cannot do because of shroud. Also my creature number is a little to low to have always another creature on the board.

But thank you for your suggestions.

Good deck. Maybe Predatory Hunger could be nice in this deck. The Vivien-series planeswalkers are great at giving Hallar some additional +1/+1 counters. We would also recommend Lightning Greaves for some extra protection for Hallar.

I think that Ethereal Armor and Predatory Hunger could be fine, and Consulate Crackdown is a very good removal for artifacts that can be excellent if you have some artifact-based decks in your playgroup.

A Swift Kick in the Rear