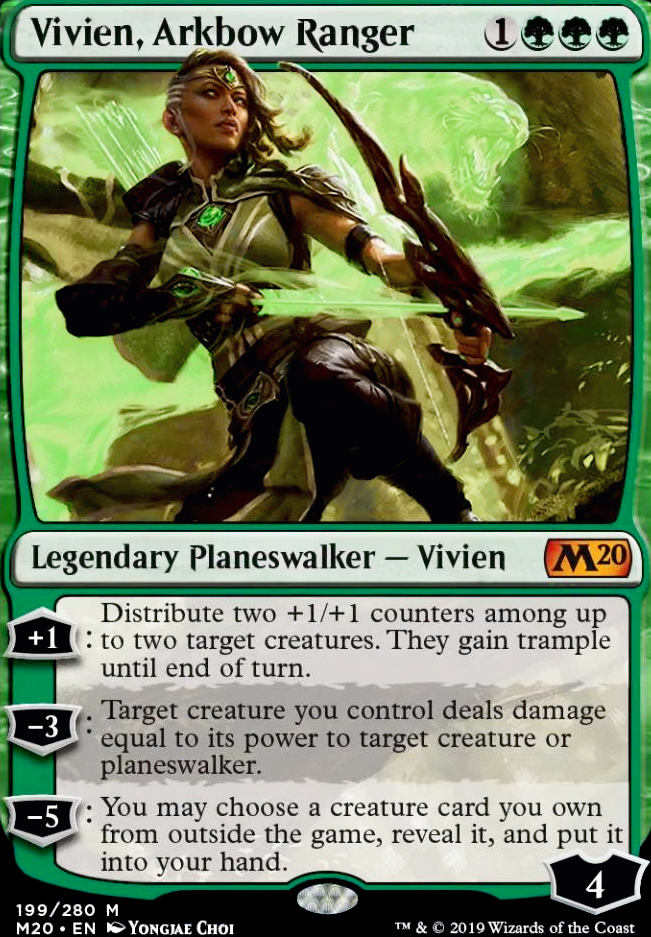 +1: Distribute two +1/+1 counters among up to two target creatures. They gain trample until end of turn.

-5: You may choose a creature card you own from outside the game, reveal it, and put it into your hand.

Vivien, Arkbow Ranger occurrence in decks from the last year 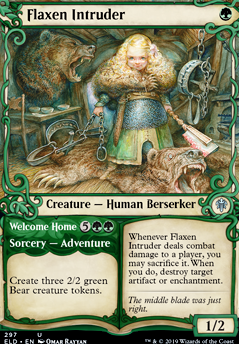 Forgot to mention that Vivien, Arkbow Ranger and Ajani, the Greathearted buff up to 2 creatures or my entire team for 4 mana and provide more options in a turn than a single pumping instant, sorcery, or enchantment will. Ajani giving team vigilance is a 2 for 1 effect weather you plus for life or minus for a team buff and Viv adds trample to my big guys that might not have it already. Itâs all really nasty.

After playing the deck some, it just doesnât need them. The synergies between the creatures is already really strong. The only reason Iâd bring in instants and sorceries is for protection and removal. The Chamber Sentry, Voracious Hydra, Vivien, Arkbow Ranger, and Knight of Autumn fill the various removal roles and we have and The Ozolith makes us not care very much about removal. I could see wanting Heroic Intervention in the sideboard for direct protection or maybe Feat of Resistance but so far in testing itâs actually fast enough to put on pressure that youâre not usually playing defense at all. Itâs very much a tap-out deck.

I would replace the ogre by a girl, maybe Vivien, Arkbow Ranger, to maintain the girl flavor and the counters mechanic. Did your girlfriend liked the deck?

Saw your reply and got to thinking about this a little more. So here's my random, all over the place thoughts.

Omniscience came to mind for the maybeboard...not sure how well you could get to the 3x blue to cast it easily though.

I don't know why but the Gilder Bairn in your maybeboard strikes me as having potential. What I am thinking would be some repeated way of tapping and untapping it with loads of mana available to keep adding loyalty counters to the planeswalkers you are wanting to add/already have. The big issue would be getting the mana to untap it repeatedly and being able to tap it constantly.

Here's what I am thinking in to fix that problem. Paradise Mantle (pet card) to tap it for mana and Nyxbloom Ancient to make it 3 to pay for the untap effect all at once. Keep doing that and you could put unlimited loyalty counters on the walkers and ultimate them the turn they come out.

At one point I wanted to suggest Leyline of Abundance but it doesn't have synergy with Arbor Elf. It could be a turn 0 play for free devotion though.

Another card I considered was Incubation Druid but you'd want to find a way to cheat the adapt cost on it. The graft mechanic came to mind but you'd still have to wait a turn to tap it (obviously). Ironshell Beetle maybe? Or there's Vivien, Arkbow Ranger Like I said at the beginning, all random ideas. I do like that you are open to big changes in the deck.

Last couple things for this post... I think you could use a couple more lands and under your turn 3 directions you wrote over when you probably meant other...just a hunch though.

Vivien, Arkbow Ranger I think you could play a second one of her! She can be a game changer!

I would love to mess around with this, especially since the most recent bans mean we don't have to worry about our pummler getting elked. A couple of thoughts on the list: