Choose four. You may choose the same mode more than once.

The Archmage's Lexicon
by OrsinsFang

The Red Green Show
by TapatioDorito

Carth has Connections
by KBgamer2010 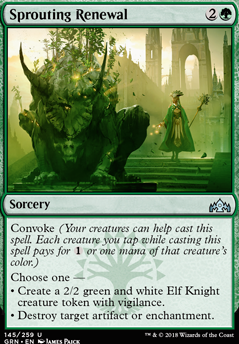 Here's a Kethis deck I put together that turned out to be crazy fun: Superfrens Tokens/Reanimator. I wanted to play only planeswalkers that made tokens. Because Kethis, the Hidden Hand is basically Yawgmoth's Will / Underworld Breach , I found cards like Oath of Druids that could turbo self-mill, kind of like Hermit Druid . Primevals' Glorious Rebirth and Urza's Ruinous Blast became my go-to wincons. Planewide Celebration is probably another.

I've played vs. several Atraxa decks and they're usually very similar. Often she plays as archenemy and often relies on 10+ mana combo wins (like Teferi + Chainveil). What I liked about Kethis was that I didn't care if my planeswalkers died.

Imo, go beyond "planeswalkers" as a theme and narrow your focus to #tokens, #+1/+1 counters, etc. This lets you play around weaker planeswalkers, making your deck less threatening and more versatile and unique.

Since I have absolutely no idea how to best play this, I'll just say: I assume you've seen MTGGoldfish's Against the Odds with this combo? Might be a good place to look if you haven't!

He doesn't run the Setessan Champion obviously since it wasn't out yet, but I think the 4 Leafkin Druids is probably better than Altar of the Pantheon. And maybe other ramp cards like the new Migration Path will be good to help you get to Planewide Celebration mana?

I mentioned it as a single card way to get the same effect. The previously mentioned way requires a 1 of enchantment and a 3 of planeswalker on board at the same time, where Nissa does a very similar job of getting to the required mana for Planewide Celebration with only the 1 card alone. I understand that the payoff for playing it on your opponent's endstep will lead to the instant win, but why not provide a more reliable way to get the citizen token and life gain while also giving a threat in itself, as well as the perfect target to just proliferate 4 times. I just think that you will be able to get the required conditions for Happily Ever After and pass the turn without losing through this route than you would trying to assemble a tough combo on the end step.

Think of it this way... You +1 Teferi with a Nissa on board, with a minimum 3 Forests and any other source of mana (dorks, Island, another Forest, whatever). End step you can do the exact same play pattern that you would if you were to use Wilderness Reclamation. But by using Nissa instead you have an alternate reason to use Planewide Celebration without needing the Happily Ever After, proactively apply pressure through a constantly growing board state, and still have a green permanent on board for what its worth.

Just explaining my reasoning why I think it may just be strictly better for what your purpose is, but at the end of the day its your deck. It looks like fun to play, I always enjoy these alternate win-condition style builds.