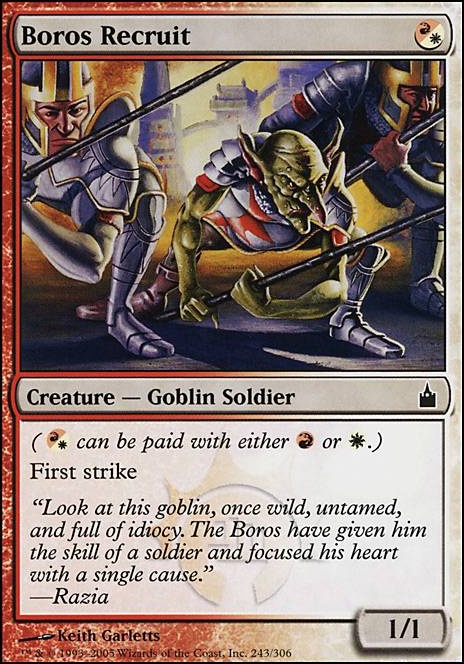 [WR First Strike] Be Quick or Be Dead
by poutrel

Have you tried Boros Recruit? It's a pretty good one-drop, has First Strike, is a Goblin, and isn't a big enough target for your opponent to try and remove him.

Return Golgari Recruit to the battlefield tapped from a graveyard

I find your lack of Rally the Peasants disturbing.

Squee's Embrace could be interesting to put on a creature to prevent getting 2-for-1'd.

maybe Boros goblins will be a deck now ?

colton815 on Do you speak goblin?

as far as a splash color, i would probably go green if any at all. lifegain is a hard counter to aggro strategies that run out of gas quickly, and Atarka's Command serves as Skullcrack 5-8. the +1/+1 also quickly adds up if you're amassing an army of goblin tokens.

if you want a 1-drop goblin, go with Legion Loyalist. first strike and trample help Goblin Piledriver and Goblin Rabblemaster a lot. i currently use Foundry Street Denizen in my strictly casual build of goblins (because the only other 1-drop goblin i own a playset of is Boros Recruit) but even when i'm following it up with cards like Krenko's Command, Dragon Fodder, and Hordeling Outburst, it doesnt perform well unless i played him turn 1 and my opponent is unlucky enough to not have a creature within the first 2-3 turns. if i were to take the deck to a modern FNM, i think i would change it to look like this:

also, i'd actually recommend not using Goblin Guide. i know its generally regarded as a good card, so much so that many consider it "mandatory" in any kind of aggro strategy that uses red, but as someone who has played against it many times, i wasn't impressed. it never really seemed to help my opponent win, and the extra lands they gave me was pretty darn helpful. last thing any player wants to do is dig their opponent out of a mana drought.