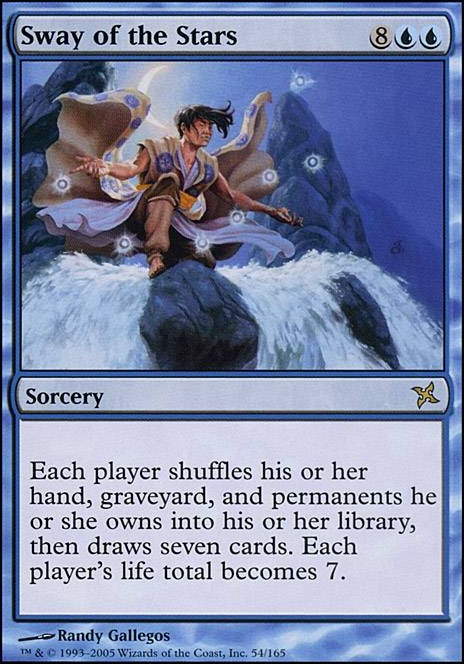 Sway of the Stars

Each player shuffles his or her hand, graveyard, and permanents he or she owns into his or her library, then draws seven cards. Each player's life total becomes 7.

Treasure for nothin' and your spells for free
by smack80

Jhoira, Destroyer of Lands, Taker of Turns
by WheatandWheatByproducts

Okay, this is epic
by Vexton_Pheope 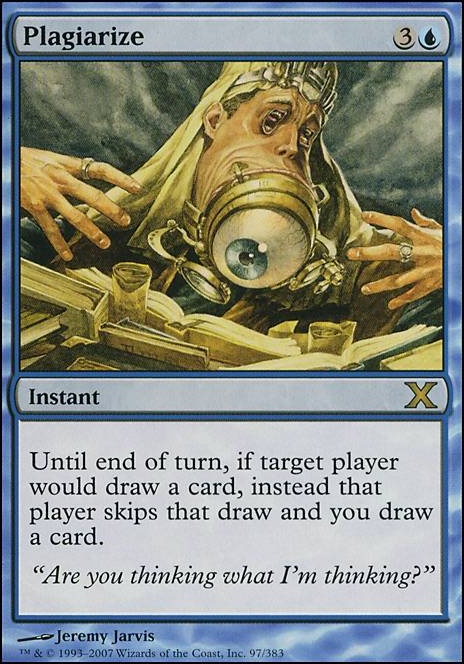 Sway of the Stars Discussion

Boza on [COMMUNITY] What cards do you ...

SynergyBuild, out of 12 unique responders, 3 have mentioned some of the "big sorceries" to be unbanned. That is a low rate among a low rate of responses. This is not a method to get "uncontroversial" opinions, you will just get people venting about the worst offenders in their local meta.

Same with the unbans - people will not consider why these big sorceries are currently banned, just that they seem to be tame given their cost. The reason they are banned is that they unfairly punish players (biorhytm and Coalition Victory ) or prolong the game unnecesarily ( Worldfire and Sway of the Stars ), but these reasons are not considered or the eternal "it can be answered" is spewed out, the commander equivalent of "dies to removal".

For plantiful examples of this, lets look excerpts for dbpunk's post:

"Emrakul can be Nevermore 'd" - unban a card, because you can answer it by playing a card that bans it from the game?

" Tolarian Academy is only good if someone doesn't wipe out your artifacts. Just like Serra's Sanctuary only works if you have an abundance of enchantments or Gaea's Cradle is only horrifying if you have a ton of creatures. " - that literal Read-the-card right here that does not account for any of differences between the three cards or even attempt to explore why only one of the three is banned.

"Prophets good, but also extremely killable and manipulatable. Same with Griselbrand. " - the literal dies to removal.

"Do these cards make gameplay difficult? Yes. But so do any number of cards when combined correctly. These just don't make you jump through as many hoops." - and then finally, a justification for why cards currently on the list are banned, just for good measure.

I do not mean to single anybody out (sorry dbpunk, but yours are just too succinct illustrations, many more answers like this are present in this thread), I just want to show that these threads cannot provide much to an actual discussion.

I would advise to take some input from here and create a separate thread for just a few of the cards - it can lead to some actual deeper discussion.

Sway of the Stars and Biorhythm don't deserve to be banned honestly. Sway is so high costed for what it does it's ridiculous, and biorhythm is extremely easy to play around it feels like.

Worldfire is the ultimate need to be banned red card. It essentially says "No one plays anything for the rest of the game." It makes a situation not where one player can't play or is unable to do things, but where no player is.

Iâm an advocate for BIG board wipes. Some people may not be for it, but I shamelessly suggest Worldpurge or Sunder . If not playing edh, Sway of the Stars and Upheaval .