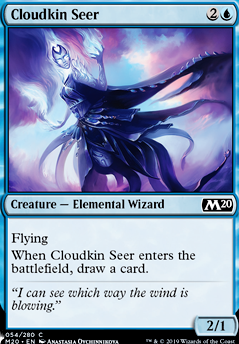 When Cloudkin Seer enters the battlefield, draw a card.

Going out of standard would allow more versatility on your part, but it would also alow your opponent to have more versatility as well, and as of currently, historic has a lot of removal, making your Ominous Seas's krakens much more vulnerable. I might be wrong on the more removal in historic thing, but I think that that's the case. You are currently playing historic though, since Cloudkin Seer is not standard legal. Suggestions for standard: I would recommend another copy of Teferi's Ageless Insight , cut one copy of Midnight Clock the payoff takes a while to get to. You can cut the Tome Raider s and the Jeskai Elder for some copies of Didn't Say Please or Saw It Coming .

As a mill deck, don't be too afraid to tank hits, your health is a resource.

This one seems just right! I have my own elementals deck with the four copies of Risen Reef and only one left to spare. I might add a third copy of Cloudkin Seer instead.

I'm going to try out Soul of the Rapids instead of Cloudkin Seer .

I like that hexproof and I can build him up with Omnath 1+/1+ counters.