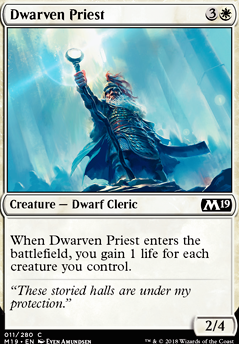 When Dwarven Priest enters the battlefield, you gain 1 life for each creature you control.

Ghosting with Hofri
by duve86 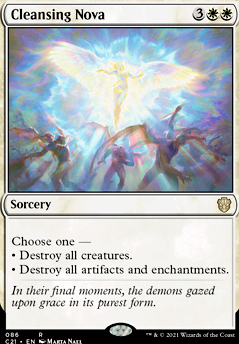 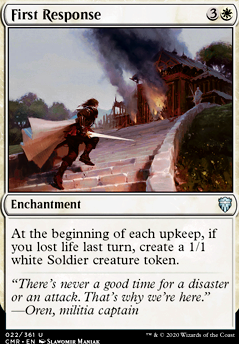 Definitely love Alesha, our first magic Trans commander, my one big observation here is that your deck runs an underwhelming number of low cost creatures. So you're not able to maximize Alesha's utility as a reanimator as it currently sits.

I would consider cutting some of your more costly creatures, as well as the spells Lich's Caress (too costly for what it does), Knight Watch (I know you have a knight subtheme, but it's overpriced for its payoff), Fell Specter (you're not running enough discard effects to make it worthwhile), Dwarven Priest (Better off replaced with a different life gain utility like Daxos, Blessed by the Sun / Soul Warden / Suture Priest etc).

A powerful add for your deck could be Cathars' Crusade

Great. Dwarven Priest could be an addition, but honestly this deck is amazing. +1

Personally I'd drop the Court Clerics for three Ajani's Welcome or an additional Soul Warden and Soul's Attendant giving you three each which gives you an open card meaning you could add another Gaze of Justice or put in three Reciprocates / Silences. You could drop the one Dwarven Priest for another Leonin Warleader or a second Shalai, Voice of Plenty.

If and when you want to venture into more than one color. You could splash some green into this with Shalai, Voice of Plenty, but you only have one copy of her. Oath of Ajani, Llanowar Elves and Enter the Unknown would be a good starting point.

I think 24 lands are too much if you're not gonna be playing Drawing cards. I also think Dwarven Priest isn't necessary and too slow. Maybe 4 Ajani's is too much too. Cut 2 of them for Metallic Mimics, maybe..? And there are so many Amonkhet cats that I'm sad to not see in this deck. Adorned Pouncer is one of them.

I left out the lifelink cards on purpose cause they slow down the life gaining proces for making tokens or a giant pridemate. I will test Victory's Herald, I've had a few games that I have a giant pridemate but can't finish because they can block it.

I'm not really looking to make it into a modern deck. But I have taken the Dwarven Priest out, they are not so effective!