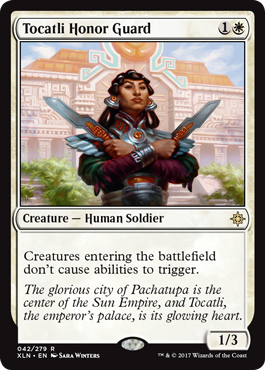 Winny the Hate Bear
by asmithson218

Torpor Orb , Hushbringer , Hushwing Gryff , and Tocatli Honor Guard for protection. Plus, Torpor Orb will trigger metalcraft and is easy to tutor for. Hushbringer is probably the best creature version of it to run, but something can be said for Hushwing Gryff's flash ability. The honor guard is just your budget option.

I used to play Allies vs a Jor Kadeen deck and once I got Tuk-Tuk out I'd completely shut down their deck for the rest of the game through multiple ETB triggers destroying artifacts. The only thing they non-bo with in your deck is Hangarback Walker, since everything else I see is on-death or on-attack triggers.

I enjoy your content and deckbuilding very much and would like your input in one of my pet projects: Winota Aristocrats.

It's a budget mardu deck so the manabase is iffy but it still seems fairly powerfull. I'd love to see what you could do with the idea and no budget.

Also wondering if now is the right moment to maindeck Tocatli Honor Guard and score some free wins!

Balaam__ on Strict Proctor and the Hunted â¦

Thereâs enough similar creatures (depending on what format youâre in) to ensure consistency; Hushbringer , Tocatli Honor Guard and Hushwing Gryff . And of course, thereâs Torpor Orb . Depending on what supporting spells you add, you could make a decent deck.

Torpor Orb knows it's worth it. Also, Tocatli Honor Guard . The idea isn't exactly new, but the deck is lots of fun, nonetheless.

Mcat1999 except that a corrupt emperor who oppresses the masses for its own benefits is not white in philosophy. Selfishness at the expense of others is as black as it gets. Masses of commonfolk rebelling to uphold the laws broken by a corrupt government, those are the white party in the conflict.

The emperor perfoming a ritual to obtain omnipotence, and the valiantly defying masses rising up against him to Cancel the conjured magic, and restore law & order back to the world, that's the flavor of a white Stifle . That's why white has so many weenies with rule-imposing static effects, the little guy upholding the law and ensuring the silly blue, black, red and green Mages obey. That's why they're supposed to be symmetrical effects like on Leonin Arbiter , Tocatli Honor Guard and Thalia, Guardian of Thraben , because nobody is above the law, especially not yourself. That's why I think your flavor text would fit a colorshifted - Stifle , and not really a one.

What you're doing is translating your own interpretation of game mechanics, as they are, into color philosophy, by what you think the intended purpose was behind a card like Armageddon ; Instead it should be the other way around, letting established color philosophy guide the design process of the (flavor of the) card.

From the article on Colors found at MTG Wiki:

White puts value in the group, the community, and its civilization as a whole. White believes that suffering is a by-product of individuals not prioritizing the good of the group. White's ultimate goal is peaceâa world where there is no unnecessary suffering, a world where life is as good as it can be for each individual, a world where everyone gets along and no one seeks to disturb the bonds of unity that White had worked so long to forge. To govern and protect its community, White makes use of and puts value in a number of broad concepts; morality (ethics, grace, truth), order (law, discipline, duty), uniformity (conformity, religion), and structure (government, planning, reason). White is a color commonly associated with good and justice, but if left unchecked or if everyone is not working toward the same unified goal, White can become authoritarian, inflexible, and capable of sacrificing a small group for the sake of a larger one. Everything necessary to preserve the laws, rules, and governance that White created.

I really cannot rhyme these described motivations with a corrupt Emperor oppressing its nation's people, that's why I don't agree with this being the flavor text for a white card as is, no matter how politically relevant the metaphor.