, Sacrifice Siren Stormtamer: Counter target spell or ability that targets you or a creature you control. 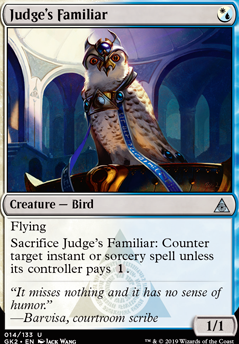 Edric poking for some fun
by MarylandLax2

Good suggestions, nocknock! Dropping Kiora's Follower for Needlethorn Drake maybe? I have a feeling the card was only there because of a Kiora theme. Lorescale Coatl is really good in this deck. Your opponent has to deal with it before you can put Shielding Plax on it, or else kill you quick. As fun as that combo looks, I wonder if it's a win more?

At the moment I'm thinking more of including Siren Stormtamer to help protect any Coatls that might get on the board. Again, I'd probably drop the Followers.

Niko9 on Looking for a casual but â¦

So, I don't really like plugging my decks and stuff, but I do have one that uses low cMc creatures and Curiosity effects, and ideally starts attacking on turn 2 every game. I'll put it here, and yeah, the main game play is to use things like Bident of Thassa to gain attacks off small evasive creatures like Siren Stormtamer and then tech it up to double down with things like Duelist's Heritage and Clarion Spirit to make more evasive creatures, more instances of damage, and more card draw off Bident or something like it. It does a lot of damage while setting up combo, which is always nice : ) Part of what I enjoy about playing it is that it really punishes decks that want to sit back and ramp for a while, because that's a lot of decks : )

Also, the commander could definitely be swapped. I just really like cute things, so...

Thanks for the interest, everyone.

mlequesne: I just couldnât get a handle on the grixis mana base, so rather than push out a poor effort I decided to forgo it and just stick with two colors. Lightning Skelemental is an awesome card, and it was originally part of the design, but itâll have to wait. We do have Thunderkin Awakener though which is pretty much a reusable Unearth in this build!

Corrosive_Cat I hadnât thought of including Mausoleum Wanderer, it might be a good replacement. Another user suggested Siren Stormtamer instead of Cursecatcherâwould you still go with the spirit?

Hi there, really cool deck. I love the Tetsuko Umezawa, Fugitive + Combat Celebrant combo. I would suggest maybe 2 cards that might be a good alternative to what you have. I think Expressive Iteration might be a more efficient spell than Cathartic Reunion. Additionally, I would also consider swapping Cursecatcher with Siren Stormtamer. Maybe the one blue mana cost is too steep but I believe it will protect your guys better. Anyways, love the creativity.