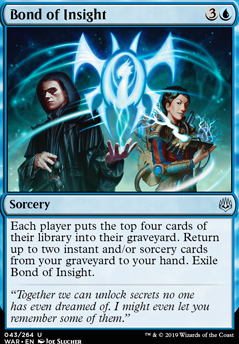 Each player puts the top four cards of their library into their graveyard. Return up to two instant and/or sorcery cards from your graveyard to your hand. Exile Bond of Insight.

Once Upon a Time in The Graveyards.
by Ambiorix69 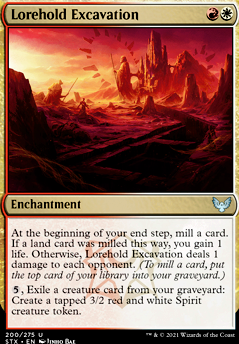 The new Beginning of the World

Exile all permanents, then every player revel the top card of their libary, until they reveled the same number of creatures they got exiled, or they reveled their libary. They put them into the battlefield under their control. The same is true for artifacts, lands, planeswalker and enchantments.

Exile The new Beginning of the World

Centuries ago, the world recovered from a disaster.

Design a card that shows a new leader in one of the alliances on Ravnica during War of the Spark. Bond of Discipline, Bond of Insight, Bond of Revival, Bond of Passion or Bond of Flourishing

Thank you for commenting. I read Aid the fallen wrong do you think I should add something like Bond of Insight? I just want to get value out of murder. Salvage scuttler was added when I was just focused on putting as much crabs in as possible. I could remove it and replace it with 2x more relic golems. This is my decks win condition.

Narset's Reversal will not yet be in the graveyard when you choose targets for the copy of Regrowth . This means you will be unable to return it to hand.

If you had copied something that returns a card without targeting (like Bond of Insight ) you would be able to return Narset's Reversal .

oeliberti I did have some cantrips in, but cut them in favour of tutor to graveyard effects and tried to have creature draw engines.

Epicurus I do enjoy the suggestions of Forbidden Alchemy and Taigam's Scheming. I cut Mission Briefing for Bond of Insight as a felt it just does more work here. Ghoulcaller Gisa has been benched due to her not being a zombie (apart from commander and wonder no zombies). Gempalm Polluter is interesting though. Also I appreciate the Tenacious D ref ;).