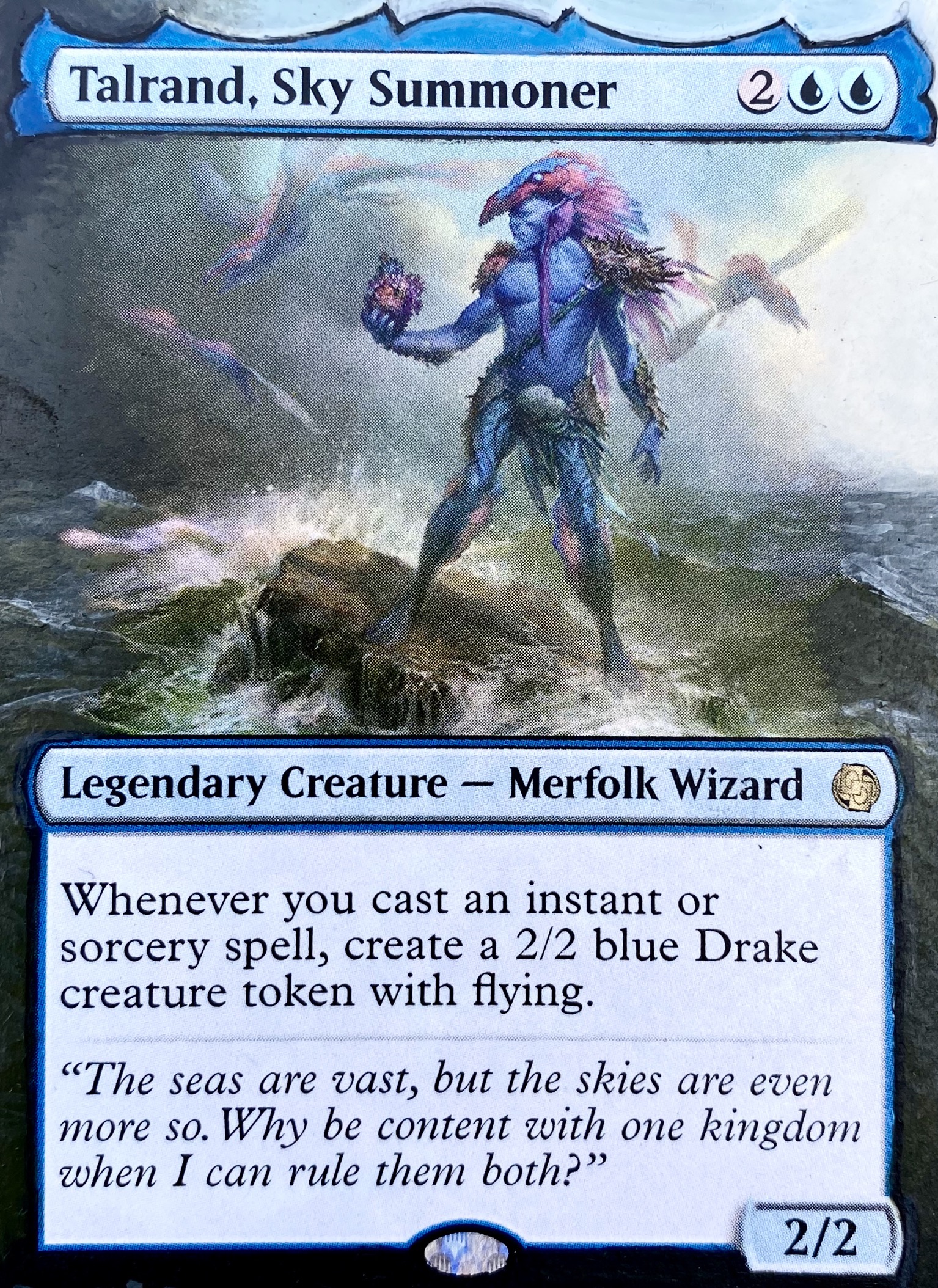 If you are a cheapskate who enjoys being in control and winning with risquÃ© combos, then you are in luck!

Cheapskate Talrand embodies everything I love about EDH: explosive, underdog wins with an underhanded (and heavy handed) degenerate combo--but for less than $75 (!!!)

This is a mono-blue control deck at its core. Itâs also incidentally a token-creation/aggro deck by virtue of its commanderâs strengths and synergies: casting as many instant and sorcery spells as possible, controlling opponents, and stacking the deck to win as early as turn three.

Thassa's Oracle is our primary win condition. If all else fails, we beat face with drake tokens.

I. Assembling the Win Combo

The win combo exploits the lack of creatures in our deck. Because there are only two creatures in the library, when we cast Mass Polymorph or Synthetic Destiny with Talrand, Sky Summoner in play and create a drake token (as a result of Talrandâs triggered ability), when the spell resolves, we exile both creatures, pull out the only two other creatures in our libraryâ-thassaâs oracle- and Leveler. We stack their enter the battlefield triggers so that when they enter, they execute our win condition: exile our library and run Thoracle for the win.

II. Tutoring for a Polymorph Spell that Will Win Us the Game

There are multiple methods to tutor for either of our game-winning mass-polymorph effects.

We use Long-Term Plans or Merchant Scroll to tutor for either Mass Polymorph or Synthetic Destiny. If we use Long-Term Plans, note that Castle Vantress will help us scry into the desired card on our next draw. Note that Bident of Thassa, Reconnaissance Mission, and a number of our filter/draw spells put in similar work.

AOur draw spells are powerful. They dig deep for combo pieces or answers, yet provide selective draw without discard. Spells such as Dig Through Time, Drawn from Dreams, and Thassa's Intervention shine in this deck.

With skill and a little luck, we will draw into either of our game winning spells, or a tutor with which to fetch one. There is little by way of recursion for either mass-polymorph type spell, so we must rely on countermagic to defend our spells. Cast defensively!

If recursion of one of our mass polymorph spells or combo pieces is necessary, our only option is Devious Cover-Up. Spend it wisely.

If we draw either Thassa's Oracle or Leveler then we have problemsâ-but not to worry! Cards such as See Beyond, Lat-Nam's Legacy, Dream Cache, and to some extent Brainstorm, will help us shuffle the combo pieces back into our library so that when the time is right, our mass-polymorph type spells result in victory.

III. Exile our Library so the Oracle Can Do Itâs Thing

This combination is quite simple. After mass polymorphing Talrand and a drake token, play Thassa's Oracle and Leveler to win.

As an alternative/additional win condition, one may include an infinite mill combo. Although including an additional win condition slows down the deck considerably, it does make it more durable and less of a 'glass cannon,' as there is always a possibility that necessary components of one combo or another will be removed. The required cards for the additional conditions are included, in-part, in the 'maybeboardâ of this list.

The additional combination is also quite simple, however it requires four more cards than the previous comboâ-but don't worry. It's just as easy to assemble as the previously described combo by mass polymorphing just three creatures.

The resulting creatures will enter the battlefield âsimultaneously,â so we will choose the order in which to stack their entrances and their ETB triggered abilities.

Play Peregrine Drake, and untap five (5) lands, with which to defend the ensuing combo pieces. Play Deadeye Navigator and soul-bound to the drake. Assuming we have at least three islands in play, we now have access to infinite blue mana.

Finally, play Trinket Mage, and use her ability to tutor the Altar of the Brood and play it with one (1) of your infinite blue mana.

We will then bounce Deadeye and/or the drake to our heart's contentâ-and mill your opponents completely.

Good job, you degenerateâyou will win when they lose for failure to draw from their empty libraries!

If weâd like to expedite our victory, we can finish the job with any number of draw spells and cantrips, targeting our opponents, as are amply included in the deck, but itâs more fun to make them wait until their (last) turn.

If youâre curious about what to remove from the main list to incorporate the additional required cards, know this: the deck operates well with less mana, and there are arguably too many many cantrips (pshhh!)

Infinite Draw is built on the back of the Deadeye/Drake combo and provides yet another alternative condition. This is also included in the 'maybeboardâ of the provided deck list.

If Leveler or Altar of the Brood gets exiled from the library, we can still use infinite mana via Navigator/Drake to cast Blue Sun's Zenith targeting ourself, drawing our library then shuffling Zenith back in to an empty library.

Them we play Oracle and we win.

In the absence or Oracle, Leveler, and/ or Trinket Mage (or Altar), we can use infinite mana to fuel Zenith to draw the library and shuffle Zenith back in to the empty library, as before. We can then cantrip to draw Zenith again. We can Cast Zenith to force an opponent to draw his/her entire library plus one then shuffle Zenith back in to ours again. We can cantrip to draw Zenith again, and blast the next opponentâs library, and so forth, until theyâve all lost for failure to draw.

Remember, we only need one successful combo to win.

What, you ask, if these terribly risky options all fail to secure the win?

This deck produces quite a lot of drake tokens. Use them to beat face. With the amount of instants and sorceries we will cast, Runechanter's Pike will quickly produce near-lethal blows. Heraldic Banner increases the power of our drakes substantially. Start swinging!

This deck focuses on one combo: Leveler and Thassa's Oracle, to be as fast an competitive as possible, but it also provides for a 'maybeboard,' of 'safer' alternatives.

The deck also utilizes just about every notable mono-blue hand-sculpt cantrip. If youâve never had the occasion to include them but always wanted to try them, this deck it for you. It also runs a number of odd counter spells that competitive decks seldom include in the 99. On that end, itâs a lot of fun.

The win combos may be risky, but they're effective, funny, and explosive. For a $75 deck, You couldn't ask for more. Or if you did, you wouldn't be a cheapskate.

Please upvote and leave suggestions. And thank you for helping this deck achieve the #1 Position on Tappedout overall! (I never imagined that would happen!)

IN [solve the equation ]â>OUT [drawn from dreams]

If youâve been following this deck then you already know that this is necessary. Iâve been thinking about it for a very long time.

Talrand and the Drakes