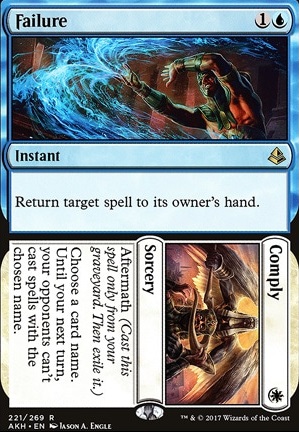 Wow. That Bant list looks really interesting. Failure is a card I hadn't thought about, and seems pretty good. The only drawback is that it can't be imprinted in Scepter for having a total CMC of 3. You also included a playset of Opt to be more consistent. That's interesting as well.

I'm amazed by this fascinating feedback. I'm glad that in such short time you made and tested your own brew. And last thought: if you are going with green too, maybe running some Growth Spiral?

Neotrup, just for clarification, your explanation with Failure is specifically for the old version of the rules, yes? With the new version, Failure / Comply has the full combined CMC in the library, not just Failure's half.