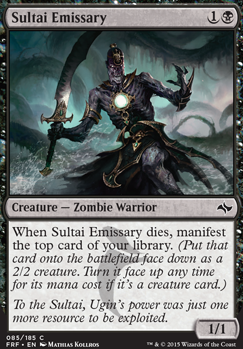 When Sultai Emissary dies, manifest the top card of your library. (Put that card onto the battlefield face down as a 2/2 creature. Turn it face up at any time for its mana cost if it's a creature card.) 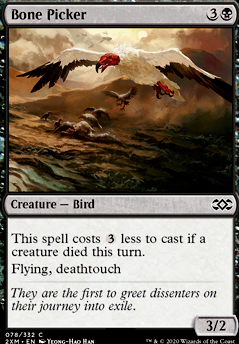 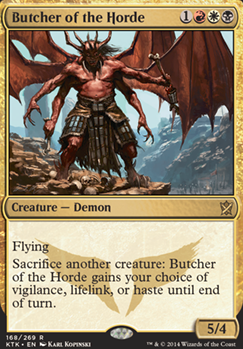 GnuofDeath, Village Rites does seem interesting. Using it on the manifest token from Sultai Emissary and Army token from Lazotep Reaver seems legit. Rites with a Festering Mummy doesn't seem bad either and having an extra way to sac a Gray Merchant of Asphodel is always nice. Even Rites on an unearthed Viscera Dragger is at worst a 3 mana draw two so I'm excited to try it out. Thanks for the comment!

Hi Masterful, thank you for taking a look at this deck. In the text below the deck you can see that I already got the great idea of Cruel Celebrant from your deck :) I just haven't put it into the list as of now, as they are just include cards I currently have. Also note the planned addition of Necropotence instead of Sultai Emissary .

Maybe I'll switch Falkenrath Noble with Athreos, God of Passage , giving me a similar effect with a funny politics interaction if we have an arch enemy on the table.

As for Liliana, Dreadhorde General I'm not so sure she will be able to stay on the board long enough to be relevant in my meta.

Bolas's Citadel I find really interesting. A bit similar to Ad Nauseam . Maybe I'll find a replacement for Requiem Angel with lower CMC and I'll put this one in and try it out.

Rustytrusty I will update the primer. My previous list was way too midrange, so I cut down on it in order to improve my aristocrats/burn packages. Begrudgingly, I had to add back some Sultai Emissary s, which I then took out for lazotep reaver as soon as it was spoiled.

Ok, to start off, this deck is phenomenal! It has great synergy and potential. There are a few cards however, that I personally think don't have a place here. For starters, Black Market is a good card, but by the time you get it onto the field, you already have enough mana for literally every single card in your deck, assuming that you have 2 green mana which Black Market can't help with anyway. A good replacement would be Palace Siege. It costs the exact same amount, plus it is still another enchantment. You can choose to add onto Zulaports' ability, or grab an extra Blisterpod every turn. Both would be better than excess mana. The only other card I would replace would have to be Oath of Nissa. It sort of seems out of place to me, and I don't really have any "replacement" suggestions per say, but I can recommend something else. Sultai Emissary is a great card for a deck like this, basically doing the same thing as a Blisperpod. If you do add that you might want to consider readjusting your mana spread to more black. Again, this deck is great, but I think a few minor changes will really tie it together.