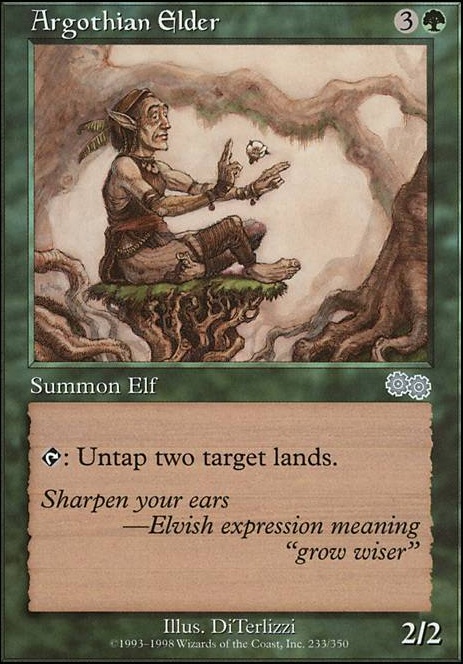 Btw, thx for letting me know Nevinyrral's Disk doesn't work like that, but:

Yisan, the Wanderer Bard now can get Quirion Ranger or Scryb Ranger and Priest of Titania or Elvish Archdruid or Beast Whisperer and Ashaya, Soul of the Wild (or a line with Argothian Elder/Ley Weaver for one of the easiest combo lines ever.

This means ashaya at least adds 4 different 2-card combos, and 3 of them go immediately infinite, another closer to Isochron Scepter/Dramatic Reversal that needs some mana.

With that, one-sided sweepers, etc. I'd argue this card is better than Craterhoof Behemoth in green cEDH lists and Casual lists alike, being a wincon through damage, ramp, protection, and tons of combos.

Profet93: oh fuck, I knew I forgot to address something.

As for the Nylea's Intervention I'm still on the fence about that one as I definitely prefer paying 2 mana rather than three. I'll get back to you on that one.

Quite thrilled we got a bolt land, that you guys can assume is going right in as it doesn't take up a slot and a 7 Mana hail mary is better than a land in a pinch. (Turntimber Symbiosis)

I made some changes. I added Wirewood Lodge and Argothian Elder for another mana combo. I swapped Elvish Visionary for Llanowar Visionary. I also added Leyline of Abundance and Hurricane