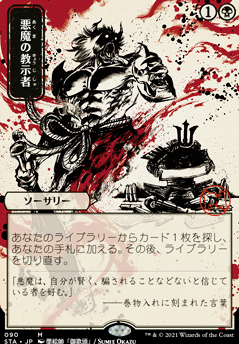 I've upgraded a past deck by a massive amount so I've re-created the list into a neat format to make it easier for deck checks in webcam games.

I originally set the deck out to be a very casual deck; but over-time I've liked playing with yuriko enough to give the deck the upgrade I think the deck deserves. I've included some of the best staples I can grab/afford and followed the guidelines of Rad_Hazards cEDH yuriko deck as I loved the look of the deck and loved aspects of how it played. That being said the deck will certainly change all the time as im constantly able to get new cards and sometimes may find something I like better to have in my deck; This deck has gone from mid range, to high power, all the way up to cEDH. Thats exactly what I want but at the moment, im still getting some people who rate it twords high power & cEDH instead of just cEDH. So as of 6/29/21 that's where the deck is being rated until I can find a solid upgrade into a 100% cEDH deck, then ill keep working at it! Thank you guys for checking out the deck and I hope to play some games with yall soon!

Also I've had some folks ask about my special sleeve for Yuriko. I originally had a lot of ninjas in the deck and wanted to make a Naruto/Akatsuki themed deck so this is a sleeve I picked up from Altered-Sleeves. They have great looking art and the sleeves are super high quality. Definitely makes your commander stand out! Alt sleeve art can be found here: https://www.altersleeves.com/product/eog3yhr70htwece

The Main Goal of the Deck

The deck is an EDH/Commander deck. The most simple use of the deck is to throw in cards that are 1 cost or very low cost that are unblock-able or hard to target; then bring in the commander and other ninjas/rogues with ninjutsu after blockers are declared (which are normally none due to unblock-able) and then apply the damage from the ninja to the player; commander will help with excess damage due to the "Whenever a Ninja you control deals combat damage to a player, reveal the top card of your library and put that card into your hand. Each opponent loses life equal to that card's converted mana cost." This happens normally as early as turn 2 or 3. There ARE high-cost cards in the deck, but. They're in the deck to provide some extra damage after attacking with a ninja with Yuriko due to the High mana cost; on top of the fact that during the late game the high-cost cards could prove useful as well. The deck is also able to be manipulated with a few cards such as; Brainstorm, Telling-Time, Crystal Ball, Seer's Lantern & more. This can furthermore be manipulated during a plan to use ninjutsu. When ready to attack with an unblockable creature you could use a card such as "Mystical Tutor" to find a card like "Dig Through Time" to place on top of the deck. You would then, ninjutsu the unblock-able creature (or just any ninja/changeling) and trigger the commander's ability to draw the "Dig Through Time" and hit them for whatever combat damage you were going to deal and the additional 8 damage from "Dig Through Time" 's mana cost. Potentially dealing around 13 damage on turn 3.

In this deck theres been some recent power upgrades in the deck to help secure more wins outside of damage; or just some quality of life improvements. One combo that can be used is Mystical Tutor + Blinkmoth Infusion + Yuriko, the Tiger's Shadow. This isn't going to be absurdly powerful but can be a useful tool for some extra damage; you can also use Temporal Trespass if you dont have access to Blinkmoth and then ninjutsu in for some solid damage. Although if we're looking for some good combo pieces are Demonic Consultation + Thassa's Oracle This one is quite a nice combo. In simple form you bring thassa out for 2 blue and soon after play the demonic consultation and name a card that isn't in your deck. Youll draw untill you trigger thassa's ability. "If X is greater than or equal to the number of cards in your library, you win the game." Its a nice and fairly fast win for and If they don't have many answers it could spell disaster for them. Aside from that there are a few things in this deck that make it quite easy to move and manipulate the deck. Such as Scroll Rack This is very helpful due to the fact that you'd be able to draw a card such as Temporal Trespass or Blinkmoth Infusion and place it back on top, allowing you to continue to attack with your ninja's and trigger your commanders ability which, will draw the card you just placed on top dealing tons of damage. All in all, there are some improvements that can be made but at the current moment this is what I've decided I want the deck as.

Demonic Consultation is just 1/2 of our new combo! Play this while Thassa's Oracle ETB trigger is on the stack and once they resolve, you win the game! As simple as that :)

Thassa + Demonic Combo & Tainted Pact + Thassa Combo's Tainted Pact - With our mana base being 1x of's, we can use Pact as our second Demonic Consultation.

Thassa's Oracle - The heart of the combo. The ETB trigger goes on the stack and you cast Consultation or Pact and win the game!

NOTE: These piles rely on Yuriko or another ninja attacking and getting a Yuriko draw trigger. That being said you, if you cannot attack and/or have no way of getting that first card from the Doomsday pile you can still cast Doomsday and stack your pile and pass the turn and wait for your draw on the next turn. While risky it is still very doable, especially if you have interaction in hand.

Doomsday is a versatile card as it doesn't necessarily need one 5 stack of cards; it has the option to use others if one has been removed from the game through exile or other types of play.

What stacks can YOU use in the deck? Well as of right now we have 2 active stacks that Im inclined to use. There are others but at the moment we're missing out on a Cavern of Souls due to pricing so a lot of stacks are out of reach for the time being BUT, we do have 2 that are working great. The two you'll likely be working with is

Thanks to EVERYONE whos helped me work this deck or helped describe parts of the deck that even I wasn't very familiar with. This section is to list the places/resources where I got information from folks and was able to build this deck/list with.

THIS Majority of the competitive/cEDH cards came from this deck by Rad_Hazard 's cEDH - Yuriko: Doomsday Oracle deck

As well as a great explanation on the thassa combo from this thread: Reddit Article https://www.reddit.com/r/CasualMTG/comments/hjmdwe/how_does_demonic_consultation_and_thassas_oracle/ by user zokotel.

Finally I have you to thank for reading the deck and taking part of the fantastic community over here at tappedout.

Removed Hullbreacher for Narset, Parter of Veils because ofc wizards would ban hullbreacher.