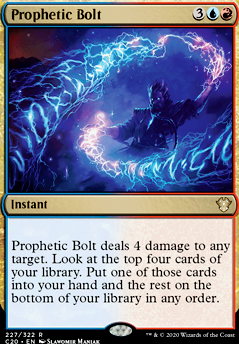 Prophetic Bolt deals 4 damage to target creature or player. Look at the top four cards of your library. Put one of those cards into your hand and the rest on the bottom of your library in any order.

Ya like that? Well let's do it a few more times.
by dseto

+1: Look at target players hand. You may cast an instant or sorcery spell from it without paying its mana cost. If you don't Scry 1. (Planeswalker's Mischief)

-7: You get an emblem with "whenever an opponent casts a non creature spell clash with each player. The winning player may choose new targets for that spell or counter it. (Psychic Battle)

Ok, that's been sitting awhile so options: Continue above if you can, or non creature wild card sans blue, or... turn a Planeswalkers color identity to reflect a change from good to evil or vice versa.

I think it got accidentally removed in this list, but I do run Lightning Greaves in this deck. Additionally, this deck runs a swath of counterspells, even more in the cEDH version, and those are usually enough to protect Mizzix.

Narset, Parter of Veils wouldn't be a bad addition, but I can't think of anything I would cut for her. Every non-instant or sorcery in this deck needs a really good and synergistic reason for being in, and while Narset can slow down opponents and filter some cards, I'm not sure I'd put her in. But she's worth a test

Great deck!
I would consider consider double your number of ramp artifacts from 5 -> 10, so your total amount is 11. Next I would look at the sorcery spells list and see if could find alternatives at instant speed.
I think you are on the low side on protection spells for mizzix. You can use counter spells, protective equipment/enchantments or bounce spells. I dislike protective equipment/enchantments because they don't give experience counters, and they typical get attached at sorcery speed. Counter spells can be good but I have come to love bounce spells the most. I can see you have a few like Regress . They are good because in the early game, they still give you an experience counter before Mizzix gets returned to your hand. With counter spells in multiplayer im often able to counter one thing, and then there are 2 other players i can't defend against. It is easier if just get Mizzix back to my hand. Bounce spells that also can draw or get back to your hand are nice, such as Capsize , Blink of an Eye , Repulse , Mystic Confluence .
You could consider mana spells Mana Geyser , Inner Fire (if you often can draw many cards), Brass's Bounty . Mana Geyser could even be considered a replacement for mizzix (if she get hated), it is not unlikely in a late multiplayer game to get +30 mana from it. Anyway, these "ramp" spells help you storm off better.
For win conditions, it looks like you are storming. Why not also use Ignite Memories ? If you experience that you often sit with a an empty hand you could consider some "wheel" effects, Commit / Memory , Windfall .
Some defensive spells i like is AEtherize and AEtherspouts . Once your opponent have tried running into these they will hate attacking you in the future.
Finally i have had some fun with Radiate . Its instant speed, so you can use it just before your own turn. If you combine it with a kicked Blink of an Eye you can return all non-land permanents and draw a card for each permanent you bounced this way. The total cost is i 9 CMC without Mizzix. You could also, with Mizzix make a game ending combo with Radiate + Supplant Form . In your case it could be used with your burn spells (that targets single creature/player) or with Prophetic Bolt .