Whenever an opponent draws a card except the first one they draw in each of their draw steps, create a 1/1 green Snake creature token.

Whenever Xyris, the Writhing Storm deals combat damage to a player, you and that player each draw that many cards. Draw Some Cards
by TheOrical

The Wheels of Snakeâusar go Round and Round
by KayneMarco 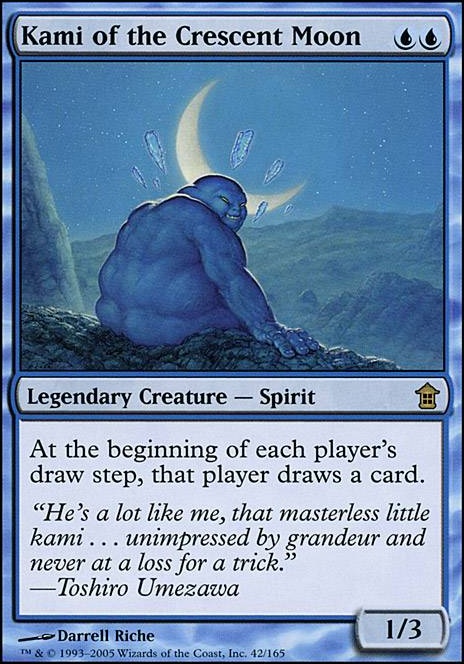 Step 1: Protect yourself. Cards like the ones EleshNornsFs and plakjekaas suggested are very solid. I might also suggest Leyline of Sanctity and Privileged Position , depending on budget. Goad cards and the Vows from Commander 2011 prevent people from attacking you. A token swarm is a good excuse to break out a Supreme Verdict or similar effect.

Step 2: Help others. You don't want want to be too threatening, so give people what they want, but not too much. If one person is able to take advantage of your gifts and dominate the table, you become guilty by association. Spread the love evenly. Add some cards that help you more than they help your opponents, like Xyris, the Writhing Storm or Fiery Justice .

Step 3: Pick a win condition. These decks are typically pretty slow and defensive, so you may be able to set up a combo win. Otherwise, keep yourself healthy and everyone else targeting each other until you can establish enough board presence to take over.

I have a Xyris, the Writhing Storm deck..Snakes on a Planeswalker - Xyris EDH swarm its one of my favorites to play. I like that you have gone heavy into mill. Altar of the Brood ends up being one of my favorite win cons...

Depending on how many wheels you get out it might be worth Spark Double , Sakashima of a Thousand Faces , or Sakashima the Impostor . I love having 2 Xyris in play to double my snake drops.

A quazi-wheel, Wheel and Deal could easily replace Wheel of Fate . Its cheap, but I don't like giving my friends 3 turns to figure out how to kill my commander.

Either way, I love seeing another snakes deck.. I will be stealing a couple of your ideas i think :)

Echoing Equation: Brudiclad is very sad that this card has a simic color identity (cough Thousand-Faced Heroics cough). Anyway, point this at Najeela, the Blade-Blossom or Ezuri, Claw of Progress and you'll likely threaten to kill someone. Xyris, the Writhing Storm can produce an absurd amount of sneks for similar results on the turn after, while Edric, Spymaster of Trest can probably make you deck yourself with a source of evasion

Spined Drake: Ironically, this set will probably not have Tidehollow Strix and friends

Rhadamanthus on How do snakes from Xyris â¦

With the way it's written, Xyris, the Writhing Storm triggers separately for each card drawn. Those triggers resolve one at a time, creating one Snake each. Mystic Reflection will only affect one token in your example.

Dzapo on How do snakes from Xyris â¦

Also what I'd like to know is for example if I cast Windfall and each opponent draws say five cards. If I have three oponents, then do I get fifteen separate Xyris, the Writhing Storm triggers or three triggers for five snakes or one trigger for fifteen snakes?

Update: Xyris, the Writhing Storm is now the Commander. Dropped Kraum, Ludevic's Opus and moved Kodama of the East Tree to the 99. Also dropped Regrowth and put in Cryptolith Rite . Still looking for room for Nyxbloom Ancient and Mina and Denn, Wildborn .

Cool deck! I really like the idea of adding blue to get more value out of Borborygmos Enraged . Xyris, the Writhing Storm might work better as your commander though, since it can give you card draw and some bodies on the field. Since it seems like the lands or mostly there to fling, instead of actually using, you got probably use some more alternative ramp sources- like Vorinclex, Voice of Hunger , Nyxbloom Ancient , and/or Cryptolith Rite (which would also go well with Xyris), budget permitting. Mina and Denn, Wildborn also seems like it would be worth looking into. This deck has a lot of potential and I'm excited to see how it continues to improve!