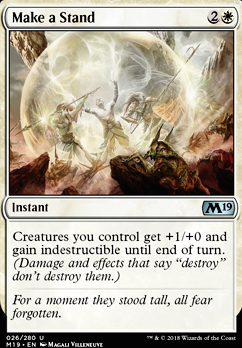 Creatures you control get +1/+0 and become indestructible until end of turn. (Damage and effects that say "destroy" don't destroy them.)

I'd definitely take a look at Vito, Thorn of the Dusk Rose and Indulging Patrician as options. Vito especially is one I can't wait to try out.

Make a Stand could be a side card if you feel you need more boardwipe defense but I think you have some pretty good counters already.

I think you could make use of the classic Arcbound Ravager in place of a couple Cranial Plating. For the sideboard i am suggesting Make a Stand to negate board wipes.

Presence of Gond may be good to tap your commander and have it make 2 tokens instead of the one.

Beastmaster Ascension will quickly build up counters with all the tokens you have so they will all quickly start to hit like trucks.

To protect from board wipes Make a Stand , Unbreakable Formation , Rootborn Defenses , and Dauntless Escort will all save you from most board wipes.

There is also Heroic Intervention but Iâm mostly trying to recommend cards that arenât so pricy.