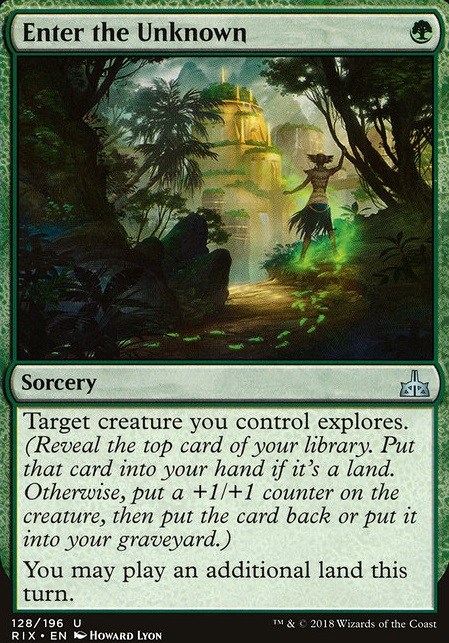 Niko9 on Anybody have a card that â¦

I think that part of it is the deck that things go in and how they play out, but I've definitely had a few pleasant surprises.

Enter the Unknown in my dino creatures ramp deck is actually so good. It's extra lands that I feed into Lotus Vale and untappers synergy and it also can give card selection, pump creatures, or even dig for a land that you then play. I get the big downside of having ramp that's usually not turn 1, but one mana doing three things is exactly what I want sometimes : )

Half-Elf Monk is super deceptive. I just really liked the card, and thought it was no good, but then I put it in my neo-samurai deck to try it out, and it's always an amazing play. Vigilance with the tap ability is surprising. The monk can attack, block, and tap, and that's a lot for one turn cycle.

And in general, my Willbreaker and explore the dungeons deck turned out way, way stronger than I imagined. I thought to make a jank deck out of running through Dungeon of the Mad Mage or Lost Mine of Phandelver and using the dungeon's target abilities to steal creatures with Willbreaker and well, it's viscous in practice. It sounds so terrible, but it became by far my most evil deck. I have trouble playing it a lot of the time because it can just run over most creature decks. And that's a pretty good problem to have for what I built to be straight jank : )

Niko9 on Calling all Graveyard lovers

I always really like Enter the Unknown because it can put something in your yard, give a little pump, and ramp you all for one mana. Even at it's worst, it's a to shape your next draw a little, and that's not bad at all.

A Landslide of Creatures [Landfall]

I'm not sure how useful it is, but I've always loved Enter the Unknown for creature and lands together decks. It's an extra land with the benefit of allowing you to modify your next draw, and it would play nice with Steppe Lynx It could possibly give lynx +5/5 on turn 2 if you have enough lands in hand.

Nothing revolutionary maybe, but I do love the card : )

TheStoneRaptor - I noticed you are running some ramp, likely to help with the pretty high mana curve. I would encourage you to try out Enter the Unknown. Unlike the ramp you are running, you can play this pretty quick and it either pumps or ramps. A good card to replace with this would be Vastwood Surge as it is kinda lackluster for 4 CMC and for 8 CMC you get to add some counters...Drop this card for something you will actually play every game instead of something you may play once in every twenty games.

Personally if it were me, I would be dropping the 4xArcus Acolyte, 1xBasilisk Collar (only 1 here because I know you like it in the deck otherwise I would drop all of them), and 3xEnter the Unknown. I think if we made a ramping counter deck that Enter the Unknown would be better but I feel like most the time I play it, I just get a +1/+1 counter on a single creature which is not very impressive. I swapped that out for Snakeskin Veil to shield some removal. That gives you 8-10 slots to play around with!

Drestlin - I am not sure if it helps you but I was getting tired of Conclave Mentor or similar key creatures getting bolted or destroyed so actually swapped out Enter the Unknown for Snakeskin Veil. It has had some value as it has kept creatures on the field which is key and I did not feel like Enter the Unknown was really helping me out the majority of the times I played it. I saw it on your sideboard so know you have thought about it but just want to let you know it is nice for the hexproof and extra counters!