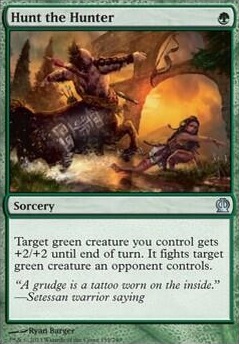 magers Hey dude, thanks for having a look! As far as that card slot goes, I feel Hunt the Hunter is hindered quite substantially by the fact that it can only be used to fight green creatures. The power boost is sweet though so maybe a possible sideboard option, especially as green has the beefiest creatures. The Prey Upon's may well come out in favour of some other white removal in future. Thanks again!

Have you thought about Hunt the Hunter instead of prey upon?

My first thought is that you have nowhere near enough land, even in a mono colour deck the minimum is 19-20, in a two colour deck 21-24 is normal. My second though is that your mana curve is off, you don't have enough 1 and 3 drops and too many 5 and 6 drops.

Ok, that out of the way, there is a simpler question; how do you plan to win?

Hunt the Hunter, Savage Punch or Prey Upon are far more efficient than Hunt the Weak and they're not the only examples.

Cards like Arbor Elf and Sylvan Caryatid are great in multi-colour decks and green is the king for cheap creatures that provide this effect, again it is more efficient than using Nissa's Expedition...

Hope this is of some help, as I said try to work out the focus of the deck and definately add more land.