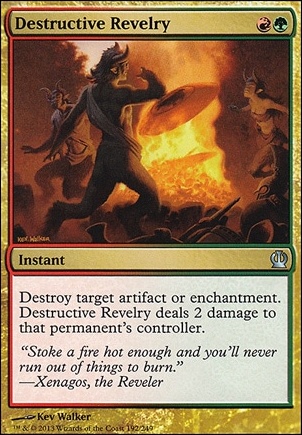 Destructive Revelry occurrence in decks from the last year First things first; I love your deck! I like the theme and I really like that its an actual zoo deck instead of a midrange deck.

after reading some comments I dont think Hide / Seek will help against Blood Moon.... once Moon is resolved you will only have access to and if your able to sac Wild Cantor/Burning-Tree Emissary or put in Steward of Valeron... so Hide is out... and Seek kinda just reduces the odds of them drawing into a moon I guess?

maybe Engineered Explosives would work for a preventative...Cindervines or Destructive Revelry for options?

Have you considered Hull Breach over Destructive Revelry ? The 2 for one on Hull Breach is really nice, assuming instant speed answers aren't as important in your meta.

Looks fun, but I am a little concerned with some of the slower options like Bramblecrush and Into the North . Have you looked at some of the commands like Atarka's Command and Dromoka's Command for quick flexible options for the deck? Also for a cheap enchantment/removal option, may I recommend Destructive Revelry ? Either way, keep at it. Always fun taking a concept and adding a fun twist to it.

I have replaced Mirari with Arcane Encyclopedia , which lowered this deck's converted average mana cost from 4.47 to 4.44, and I also replaced Destructive Revelry with Cindervines , since I feel that that card is better in most situations.

Should I replace Tyrannize with Bedevil ? Lowering the deck's mana curve would be a good idea.

1) Silverfur Partisan doesnât seem worth it... maybe better as a sideboard card. Destructive Revelry should defo only be in your sideboard and not the mainboard.

3) Howlpack Resurgence is garbage and you should aim to instead run more of your good cards like Full Moon's Rise . Iâd also ditch Domri, Anarch of Bolas as he just isnât useful (he doesnât help you if youâre behind, and doesnât help you stay ahead well either).

4) for sideboard, the main threats you want to be able to deal with is tron-lands, storm-like-spellcasting, artifacts, and graveyards. In your case you probably also want a way to prevent boardwipes. Damping Sphere is a great option, as is Scavenging Ooze and Tormod's Crypt .

Thanks for the input! Yeah, Iâm a huge fan of the Sphinx, but he is really narrow as far as versatility goes. Heâs a nuclear megaton bomb in the mirror but does jack everywhere else. Iâll put in a Disdainful Stroke in his place, with the caveat that he comes back if itâs Stoneforge all day every day meta.

Iâm also not really a super believer in Leyline of Sanctity because it feels like Burn jams in 4 Destructive Revelry in the side every time I put them in. Iâd consider two though

Hey thanks for the comment TitaniumChopstick. If you look at the decklist I linked you will see that the deck I have constructed is a jund style deck that involves powerful one for one removal to disable the my opponents while playing powerful creatures such as Dark Confidant and the new card, Dreadhorde Arcanist , to generate value and win the game. the main use of Dreadhorde Arcanist is to flashback powerful one cmc spells, which is why the deck is in rakdos colors as it has some of the best like Thoughtseize , Inquisition of Kozilek , Lightning Bolt , Fatal Push , Unearth , and Surgical Extraction . Since the deck is mostly cmc one cards that are powerful to play, the deck has no discard outlets and plans to simply cast the spells to put them into the graveyard for Dreadhorde Arcanist to reuse. While the deck is mostly cmc 1 spells, there are a few 2 amd 3 cmc cards like Kolaghan's Command and Collective Brutality which cant be flashed back with Dreadhorde Arcanist on its own. The deck mostly runs higher cmc spells because of their sheer power, but utilizing other multifunctional cards such Funeral Charm and Sword of Light and Shadow , you can pump Dreadhorde Arcanist and allow the option of flashing these spells back as well. While these cards are used to flash back these powerful spells, it is pretty easy to see that these cards are also individually powerful, and are not only in the deck for the purpose of increasing Dreadhorde Arcanist 's power. It is in a deck like this that I think Dreadhorde Arcanist is most powerful, and Id like to know your thoughts on the build.

I added flame slash because I found that the deck still has a problem with removing big creatures. A creature four or more toughness is actually very hard to deal with, and if that creature also has a high converted mana cost, there is almost nothing that the deck can do. Additionally, with Dreadhorde Arcanist , casting and then immediatly flashing Flame Slash back increases the range of damage the deck can do to a creature with one spell from six, with Lightning Bolt , to eight. This gives the deck more of a fighting chance against a Hogaak, Arisen Necropolis , which the deck could deal with previously, but only as long as Hogaak, Arisen Necropolis did not enter the battlefield before being in the graveyard for it can be hit with Surgical Extraction .

I added Collective Brutality for the sole purpose of combating burn. Once testing against burn, I found that Shadowfeed did little to nothing against it. While I found the card to actually be very useful in graveyard matchups, the main purpose of the card was to deal with burn, so I cut and looked for a better card. Rakdos does not really have much in the way of lifegain, and most burn hate that could be feasably played would be artifacts such as Dragon's Claw and Sun Droplet . I think I would run dragons claw since it can allow the deck to gain more life than it loses, especially with Dreadhorde Arcanist allowing for you to cast red cards twice, but burn has a lot of ways to deal with artifacts, and I feel that a Dragon's Claw would quickly get destroyed by a Smash to Smithereens or Destructive Revelry . Though I can see reason to run Dragon's Claw or another artifact to deal with burn, I opted to play Collective Brutality because it allows me to discard two additional cards and use all of its modes to disable burn more efficiently. Additionally, while dragons claw is only really good against burn, Collective Brutality can be used against Storm decks, and also helps to solve wrong half problems that interractive midrange decks often face.

I will make an update to the decklist shortly.