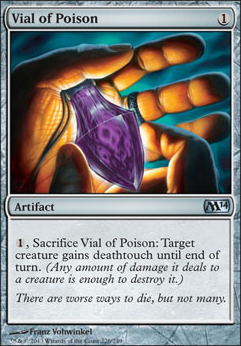 {1}, Sacrifice Vial of Poison: Target creature gains deathtouch until end of turn. (Any amount of damage it deals to a creature is enough to destroy it.)

Lurrus One Drops
by DaThiccness

Gearhead93 on First deck you Built

My first ever brew was a G/B deathtouch deck. I knew I wanted a G/B deck because I liked the physical look of the colors together. The start of the deck came from buying 60 green and 60 black cards off ebay, random lots (yes really, I had no clue what I was doing). You better believe I had those 1/1s for 1 with deathtouch from Sedge Scorpion to Typhoid Rats to Pharika's Chosen. It also had some okay to good cards like Deadly Recluse, Hornet Nest, and Hornet Queen. At one point I actually had Vial of Poison in the deck because I had some creatures without deathtouch. It was awful and I still have it, slightly altered but not for any competitive format. I keep it around for nostalgia now and occasionally break it out for casual games.

Vial of Poison has some good synergy with Salvaging Station and can provide some political influence.

Mimic Vat: Attack with an avenger, they block, you use Vial of Poison on their blocking creature. Then you have a continual plant token generator. Also Vinelasher Kudzu is great. Then have some bounce lands and you can potentially have continual +1/+1 counters each turn. Also Hardened Scales is nice, or Primal Vigor but its slower unless you ramp into it.

I would make the deck revolve more around Marchesa, protecting her via shroud/hexproof while abusing the Dethrone ability to make unblockable creatures bigger and bigger. (basically, I would go more aggro...)

Flavor-wise: Bite of the Black Rose, Vial of Poison, Crown of Doom (fits with Dethrone and it can't come back to you), Whispersilk Cloak (Marchesa loves the touch of whispersilk)

Draw Engines: Staff of Nin, Greed (remember dethrone won't work if you are the one with most life), Read the Bones, Sign in Blood, Bloodgift Demon

Chaos: Rite of the Raging Storm, Whims of the Fates