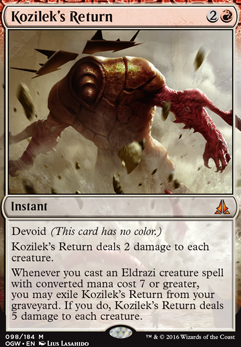 Whenever you cast an Eldrazi creature spell with converted mana cost 7 or greater, you may exile Kozilek's Return from your graveyard. If you do, Kozilek's Return deals 5 damage to each creature. 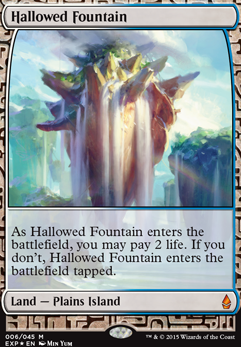 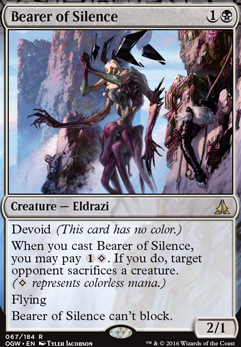 Hey, I have just a quick question. Why do people tend to run Kozilek's Returnover Pyroclasm? Thanks!

Looks fun! Was curious about a couple things though:

Deck looks like a really fun budget list! Would love to hear what levels of success you're seeing with it. Hope all is well!

So, you'll be cracking in for big damage allowing your opponent to gain 1 life isn't a big deal; Grove of the Burnwillows will out perform the other 2. A long time ago Punishing Fire put in some major work in conjunction with the land. So much so that it got the ban Hammer.

With this deck I actually like the Lifecrafter's Bestiary with 20 creatures you're bound to net more draw than the other 2. The scy is just icing.

Moderns fast. Go with Kozilek's Return or slot in a Pyroclasm I haven't been able to play in a bit but blitz looks super strong. You'll definitely need some outs.

A lot of ramp with not enough payoff. You need more big bombs to go with that 1 Pathrazer. Also, the deck needs some removal to be able to combat the opponent's threats. Brutal Expulsion, Reality Hemorrhage, and Touch of the Void could be considered. More lands that produce all 3 colors in the deck would be good also. If you want to stick to your low budget I recommend checking out some Pauper format Eldrazi lists for more ideas. Kozilek's Return and Elder Deep-Fiend also work really well together. Elder Deep-Fiend is a threat that can be cast at Instant speed on the opponents turn that will tap down some of their stuff, like their land early game for example if you can cast the Elder Deep-Fiend with its emerge cost, which you should have no issue doing.

I actually think that you should consider a couple things:

1- cut Red. All you run it for is Kozilek's Return and Bonecrusher Giant.

2- consider that this deck kinda feels like it should be UG Ramp/Dredge (maybe Sultai??). As a result, consider maybe making this an Emrakul, the Promised End deck instead of Elder Deep-Fiend?

3- definitely put in two more copies of Uro, Titan of Nature's Wrath. I mean, if you draw more than one, just cast it and use the ETB!

4- consider running Grisly Salvage and some black removal. Consider also running a couple more baby Jace (you can always pitch extras to his own ability). Consider Omen of the Sea, as it can put another type in your grave. Arboreal Grazer lets you slam Uro on turn 2. Growth Spiral gets you closer to that sweet, sweet Emrakul/Deep-Fiend.

5- take everything I say with a grain of salt. I am a casual Johnny trying his best.

against green ramp Kozilek's Return could be good to kill mana dorks.

Yes, you can make that work.

When an ability triggers it waits until the next time a player would get priority to actually go onto the stack. This means anything that triggers while you're in the process of casting a spell will wait until you're done with the casting process to be put onto the stack.

In your example both Kozilek's Return and Rekindling Phoenix trigger while you're casting Elder Deep-Fiend (so does the Deep-Fiend, of course, but this doesn't matter for your question). The triggers try to go onto the stack at the same time when you're done casting the spell. Since you control the triggers, you decide the order.