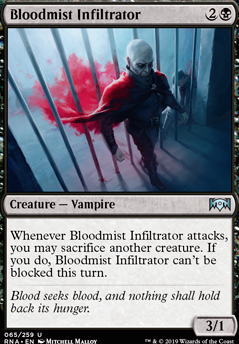 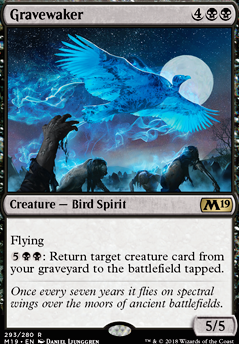 Edgar Markov
by 700bc

You should probably cut most if not all of your Divination effects in favor of stuff like Ponder Preordain Serum Visions and Gitaxian Probe .

Not sure what the role of Bloodmist Infiltrator is here. If you need a good sac outlet, Viscera Seer is probably the best one you'll get.

Mana Geode is strictly better than Manalith . Maybe consider running Darksteel Ingot instead. Flesh out your signet line and don't play lockets or cluestones. You'd be looking at Dimir Signet and Orzhov Signet .

Kessig Cagebreakers is another way to make creatures from a full graveyard.

Pitiless Plunderer makes you some treasure for those creatures you are sacrificing.

With all the creatures you have that will just die to sac outlets, you may consider Grave Pact and Dictate of Erebos

The weaker cards in your deck appear to be:

Desecration Demon from my experience, when an opponent gets to choose they always choose the option you didn't want them to take.

Vicious Conquistador probably just going to make everyone at the table annoyed early and a really bad card late.

Hope this helps with your build. You have some good synergy here. There are better versions of some cards you are playing, but you seem like you have a solid base.

Reassembling Skeleton is much better than Gutterbones for a sacrifice engine. It returns immediately to battlefield whereas Gutterbones has the life loss requirement and returns to hand. Gutterbones is better for aggro attack.

I agree with the Priest of Forgotten Gods especially later in the game. Double sack plus direct life loss AND card draw is awesome.

Judith is also good, but I disagree about the Fireblade Artist because all of your deck's creature stealing capability is at the speed of a sorcery and until end of turn. The Fireblade Artist has to be used during upkeep. You can sack your own tokens, but you may have better uses for those--reactive uses like block-and-sacks.

Light Up the Stage was really good in limited during the prerelease and that should carry over to constructed.

Theater of Horrors is a way to accelerate the deck, but I would be really concerned using it against any control because you could permanently exile some good cards.

Any Black and/or red card has possibilities, but if you want to keep focused on steal and sack, I like: Bankrupt in Blood , Bloodmist Infiltrator , Drill Bit (for sideboard against control), Vindictive Vampire , Goblin Gathering , Smelt-Ward Ignus .

The Haunt of Hightower could be really powerful but is really expensive. You could sub it in or out depending on your opponent.