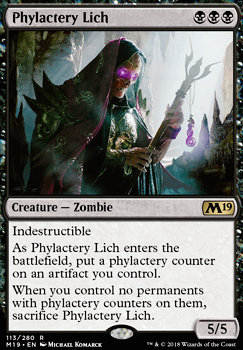 As Phylactery Lich enters the battlefield, put a phylactery counter on an artifact you control.

When you control no permanents with phylactery counters on them, sacrifice Phylactery Lich. maybe add the term non-token to stop Cannibalize from going infinite so often and slightly reducing its potency? or pay 1 life as well.

Ensoul i think has the opposite problem as it could do with a bit of beefing up. for example how much of a wave did Phylactery Lich make. I still like the idea behind it especially the theme.

Memorialise. When this creature dies return it to the battlefield except it is no longer a creature.

This would be on Enchantment Creatures with passive, triggered or activated abilities.

foxinsox in the original build for this deck I had Phylactery Lich included with Urborg, Tomb of Yawgmoth and such but I found it to be too slow so it was phased out through playtesting. I love that card though :)

Phylactery Lich might tax your manabase a little, but it would be a great addition given the amount of indestructible artifacts you have here.

cut Arcane Denial , Phylactery Lich , Vedalken Engineer , Divination , Doom Blade , an Island , and whatever else you think. Also, change the islands to Island and the swamps to Swamp

Conspiring with the Lich

The way it should work ideally in a legacy deck, is turn one: Darksteel Relic , Swamp + Dark Ritual + Phylactery Lich . Although this may work as a sideboard option, throw in a play set of Glistening Oil , and you have a turn 2 5/5 infect. Looks fun as is +1

Here's some cards to think about Opt , Discovery / Dispersal , Vraska's Contempt (from side to main), Price of Fame , Moment of Craving , Nightveil Sprite , and a couple of spicy ones (This one for sideboard if it gets more artifacts) Phylactery Lich and Etrata, the Silencer . I personally don't like any of your enchantments but if they are doing good stuff for you then don't let silly ole me take your wins away. Happy hunting.