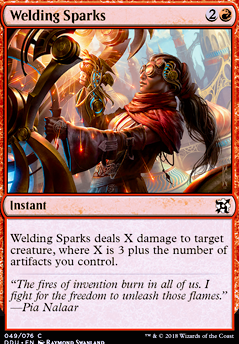 Welding Sparks deals X damage to target creature, where X is 3 plus the number of artifacts you control.

Meals on Wheels
by tsteidinger98

EDH Under $1 | A Dwarvish Attack Squad
by Benthehen333

Breya the Budget Builder
by JimbertHimbert

Akroma is here to smash face and win the arms race

Not a fan of Welding Sparks, its too narrow for a format that could literally throw anything at you. I'd also suggest Gilded Lotus, Gauntlet of Power, and Extraplanar Lens because getting to your girl Akroma isn't easy.

Argy, yeah sorry about that i was just being lazy, anyway I think I would replace 2 of the Welding Sparks in the side with Padeem, Consul of Innovation and move the sparks to the mainboard, because Removal is important in this format with Danger noodles and such running around, so you need something to kill creatures with abilities before Skysovereign, Consul Flagship. I would add the Welding Sparks in instead of the Speedway Fanatic, because despite giving your vehicles haste he only crews 1 of them, and I would also add in 2 Kefnet's Last Word and trim 1 Merchant's Dockhand and 1 Dive Down to steal The Scarab God or God-Pharaoh's Gift which has been picking up more steam lately, especially the blue-red version. I would also 2-3 of the negates in the mainboard with Syncopate since it's better against midrange and can also counter control finishers like The Scarab God and Torrential Gearhulk. For the sake of this suggestion i'm assuming Sweltering Suns is for token matchups, but if i'm wrong please tell me so I can offer a more helpful suggestion. I think you could also replace Sweltering Suns with something like Blazing Volley since the suns kills every creature in your deck, even with 1 Chief of the Foundry out. And now since you have more removal in the mainboard you can also replace 1 Essence Scatter in the sideboard with a Negate. Anyway I hope this was a more helpful post, thanks for letting me know.

I like the concept of what your basing your cards around. You may want to consider trying Era of Innovation to combo with the Whirler Virtuoso. This makes it easier for you to gain energy for spawning more tokens as you will only need one one of the enchantment in play with one Decoction Module to make it so you can spawn a token and the pay one mana to maintain your energy.

You also may want to cut Metalwork Colossus from the deck because its mana cost is only reduced by "Non-creature" artifacts. You don't run that many that help that function and the creature itself doesn't help your deck function that much in general.

I would also suggest cutting Welding Sparks in favor of harnessed lighting. the energy based spell helps synergize with the energy mechanic of virtuoso and can be played for less and do the same amount of damage by default.

I would also suggest removing Pia's Revolution as this card does not offer much value to your decks style of play. This card functions better in a deck type that destroys its own artifacts in attempt to make your opponent think if they want you to have a card back or not.

Trophy Mage I am not sure if it is good in deck or not. You may just want to cut in favor of another copy of Chief of the Foundry and Foundry Inspector each since these are your only targets with the trigger.

In case you are interested you can check out a version of this deck I made a while ago for inspiration Module Silliness (U/R). It is something I dabbled with when the set Kaledesh first came out and though tit was fun.

I already mentioned Abrade in the description.

Negate belongs in the Mainboard.

I do not wish to hit myself for 1 life if I get stuck needing .

I have never been very impressed with Welding Sparks as a card, Abrade is probably worth testing. Have you considered adding a third color? splashing green would let you play Attune with Aether which lets you lower your land count and cut Highland Lake, as well as powering up your Aether Hub and opening the possibility of playing harnessed lightning. Maybe you should consider putting some copies of Negate in the sideboard in favor of Supreme Will? You have a heavy load of two drops, and the diversity of Will seems nice. Ramunap Ruins seems like a home run for this deck.

I have a couple of questions.

Why are the cards organized by common? Pauper is all cards that were printed in common (paper) and released at common online.

Bastion Inventor is a cool idea, but if you make these adjustments you can improve the aggro curve and artificer value:

+1 [4] Inventor's Goggles **This card works very well in your deck.

I hope this redesign helps.