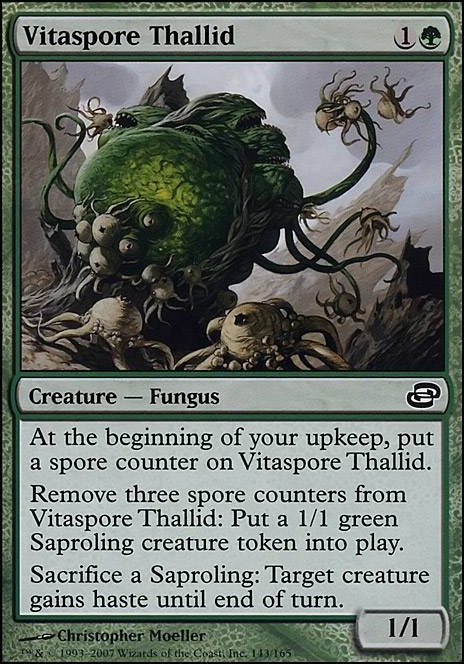 At the beginning of your upkeep, put a spore counter on Vitaspore Thallid.

Grown and Die my little Saprolings
by Flodoo

Green Sun's Zenith is a card you should consider. It fetches Dryad Arbor on turn one, and gets whatever else you need ( Knight of the Reliquary , Vitaspore Thallid , etc.) later. You should also consider running mana-acceleration dorks. Cards like Avacyn's Pilgrim , Llanowar Elves , Fyndhorn Elves , Arbor Elf , Birds of Paradise and Orcish Lumberjack would all be well-placed in your list. Consider running Sacred Foundry and Temple Garden , as you can grab these with your Farseek . Further in that vein, Nature's Lore is another good piece of ramp that gets non-basics, and it doesnât specify that they ETB tapped.

Maybe your experience has been different from mine, but Iâve never been particularly impressed by Land Tax in EDH. If you include ways to bypass the one land per turn rule like Exploration or Burgeoning , it may be alright. Faithless Looting and Cathartic Reunion are useful for filtering the Land Tax lands into business spells, as is Magmatic Insight .

Path to Exile is another card I donât like in EDH, as Iâve found ramping opponents to be pretty dangerous. I suggest Citywide Bust as a potential alternative, though Retribution of the Meek is likely better for this particular list.

Have you considered something like Slate of Ancestry to serve as card draw? Iâve been impressed with it. Mentor of the Meek would also be a great draw engine for you.

Running hate bears in EDH is also pretty good: cards like Aven Mindcensor are a great way to slow down your opponents. Stax pieces like Price of Glory are good ways to avoid getting countered. Depending on how blue-centric your meta is, you could consider Boil , Choke , or Carpet of Flowers as well. If your meta is as blue as mine, consider Pyroblast as well.

Decimate is a card you should at least consider. It varies between useless and busted, so I think experimentation is probably the only way to see if you like it. Similarly, Punishing Fire goes well with your Grove of the Burnwillows to kill smaller blockers your Meekstone doesnât keep tapped, but that is also a meta call.

Neheb, the Eternal goes infinite with Aggravated Assault , as does Neheb, Dreadhorde Champion . The prior is obviously preferable in this respect, as it is easier to get the combo going with the Eternal and it doesnât mill you out in the end. However, Dreadhorde Champion is an excellent card for cycling through your deck on its own, and may also work well with your Land Tax .

No idea what I stepped in

Aid from the Cowl > Mind's Eye

First, I had no idea Thrummingbird was a common. Holy smokes, that is a cool common!

Secondly, mana in Pauper is tough. Building a three color deck that functions requires a lot of commitment to fixing. But I really like the idea, so we have to make it work.

Now, lets start from the start. We need 22 lands and 38 non-lands. We want Pallid Mycoderm and Thrummingbird as creatures in the deck for sure, so 4 of each should be good. 30 to go.

We want green because fungus and saproling. 4 Thallid Shell-Dweller, 4 Thallid, 4 Vitaspore Thallid, 2 Sporoloth Ancient, get in there. 16 to go.

More sparolings are always cool. 2 Sprout Swarm and 4 Scatter the Seeds are vital. 10 to go.

From here, everything is options - I like at least 6 removal which is 4 Journey to Nowhere and 2 Oblivion Ring and you can go up to 10 if you like. But maybe you prefer more blue for things like Steady Progress or cards that buy time like Moment's Peace. Or cards that draw more cards like Shared Discovery. Or more cards that benefit from having a lot of dudes like Scion of the Wild Up to you.

For the lands, I think you need to save space in the non-land department and run things like Evolving Wilds and guildgates or ravnica bounce lands like Azorius Chancery.

I hope this helps. Build the deck in TO and goldfish a few times to see if you like the feel of it.

I don't really understand why the Velis Veil theme when your cards really don't benefit from the tribal side unless you actually want to sacrifice your engines after pumping them, which feels very bad, honestly.
This deck really wants to go Abzan, you will find better non-tribal spells to finish off your opponent and have an easier manabase. Harsh Sustenance, Foul-Tongue Shriek, Charge, Swarm Surge (kinda flavorful) and Borrowed Grace are great go wide spells in those colors.

Vitaspore Thallid is also pauper legal so it could be an option. Thallid Shell-Dweller could be used in sideboard hold agressive decks.