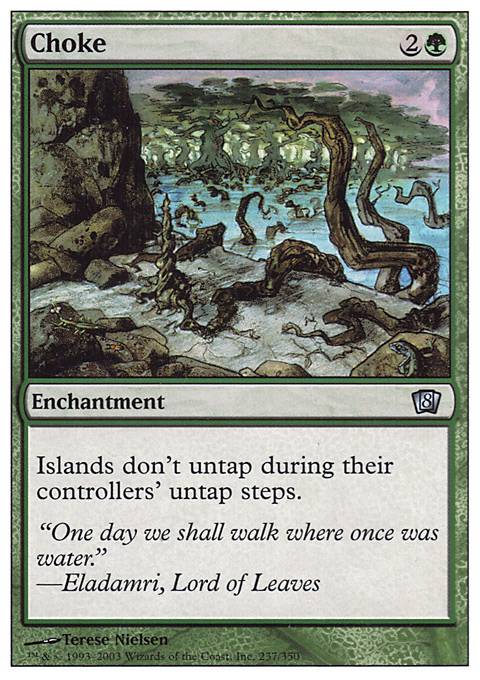 Choke occurrence in decks from the last year 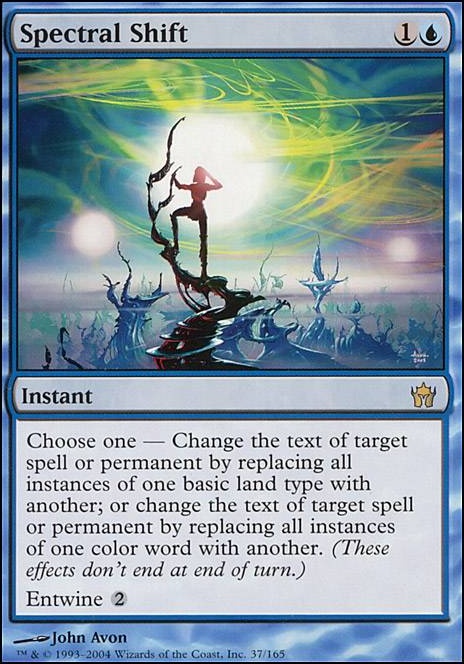 Cards like Doubling Season , Carpet of Flowers , Guardian Project , Asceticism , Nykthos, Shrine to Nyx , Sol Ring are all generally good cards in mono green. Also if you are having a hard time against blue players cards like Choke , Veil of Summer , Savage Summoning can help.

Disagree. Making opponents having to choose between removing it and keeping counters on their lands is a tough choice. It goes around the table to affect everyone else first. Also synergizes with Choke .

The only issues are getting it early enough for it to be impactful. Moreover, Ritual of Subdual already fills that slot with more synergy.

Im also biased because it's a pet card of mine

This is not a road map on how to spike a casual table. This is for players who are interested in tournment play with prize support but unsure how to go about it; mostly for edh but some of the information can be applied to other formats aswell.

Why should you listen to me?

I've been playing a long time and I play A LOT and I've even got somewhat of a reputation at my lgs due to my win rate being so high; granted, I'm just an average fish in a small pond and I still make mistakes but in tournment play I have had a 100% win percentage for 6+ months at my LGS; the store owner actually had to switch to a point system and a superlative point system due to people complaining about how much I was winning. I'm not exaggerating.

First and foremost be flexible. Often times what a player likes to play and what wins are two entirely different things. Be open to playing different colors and strategies. Playing different styles helps with understanding and pinpointing problematic cards and can greatly improve threat assessment and card evaluation. Additionally, use as many resources as you can while deck building. Friends, other players, scyfall, edhrec, gatherer, facebook groups, tappedout, and dedicated discord servers are all awesome resources that can help you brew and spark new ideas; with new cards being printed every few months decks are always in flux.

Take notes on what everyone is playing and what their playstyle is. If you notice no one at your lgs is playing a deck with islands its probably a good idea not to run cards like Carpet of Flowers or Choke . Where as if players at your lgs gravitate towards tribal decks sweepers and wraths become some of the strongest cards in your deck. Metagaming on a small scale isn't particularly but definitely takes some time and thought to make the correct choices

No takesies backsies. Hold yourself to a higher standard and if you make a mistake see if you can play your way out of it. Punish yourself so you won't repeat it. Don't blame others for your loss; evaluate what you did wrong and figure out where you may of slipped up. Sure, poor threat assessment can be a contributing factor to a loss but it's far from the only factor.

Basically, use your resources, be flexible and humble, never stop trying to improve, and always be trying to learn new things if you guys have anything else to add please feel free; especially you veteran players.

I can finally say that Ugin, the Ineffable is not bad and after painstakingly beating my head against the wall to build a customized deck I am pretty confident that I am on to something here. Eledain thanks for your feedback on Goreclaw, Terror of Qal Sisma as well as Awakening Zone . Thursday night I ran those and you were right and having them in the deck slowed it down way too much and was pointless. thanks for the heads-up!

As a real-time player I still love the feel of the actual cards in my hands and it is very hard for me to transition over to the "virtual" MTG world so I have yet to make that leap. I realize this site is great in introducing builds at the click of the button or copy & paste. I use it for the play test feature and it helps a great deal.

Tonight I came in 4th place in tournament and that was huge with what I had come up against. The first round was with a young lady running a blue Merfolk deck. I have played against her several times before messing around with different builds and she is pretty tough. the first bout she nailed me like usual and I added a sideboard just for her and shut her down. She likes to get Sea's Claim out immediately so I brought Choke to this particular event just for her. It was hilarious and the expression on her face was every bit worth the play. "Sorry dear you just got choked.. Next!" That session I was 2-0

The next match I was up against Tron and this guy was running Once Upon a Time . The only reason he got me in two rounds was his hands were one step ahead of mine and bout two I was forced to mulligan down to four cards. he took the game with a 2-0.

The third and final match was another Tron with Karn, the Great Creator and it was definitely close all three rounds. He got Karn Liberated out turn three on the first bout and I popped creator. I couldn't come back so I gave him that win. In the second game we were neck-in-neck but I side-boarded in and dropped Pithing Needle shutting down Creator came out with two Wurmcoil Engine and Ugin, the Spirit Dragon for the win. Again the final match we were neck-in-neck and it was a race to the finish and laughing like champs the both of us all the way through. It was a really close game but I again came through with another choice sideboard Thought-Knot Seer and ended the match with Spirit Dragon again. I did get to pull Ineffable a few times through out the game and it proved to bare it's weight in gold and I am pretty happy with this custom build and encourage others to try it out if you ever get the chance. I might eventually add two more Karn Liberated later on to strengthen the brutality of it but Tron is so much fun to play and this build is sealed~

Thanks for stopping by my page here, have fun and see you all on the battlefield!

Prowling Serpopard is nice anti-blue tech but it does not give you a ton for combo activation which is why I would steer away from it. If your meta is crazy on blue, then definitely go with it, or run something like Choke . I ran Oko, Thief of Crowns for a bit but found that in a four person format he was not nearly as effective as he was in a 1 v. 1, and he generally gets mashed by the entire table and makes you a target. If you are running him to deal with things like Najeela and Gitrog, then check out Kenrith's Transformation .