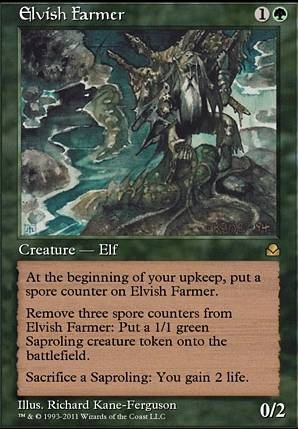 At the beginning of your upkeep, put a spore counter on Elvish Farmer.

Sacrifice a Saproling: You gain 2 life.

Ghave is a Real Fungi
by Jukeloyal

Elenda, the Dusk Rose + Ghave, Guru of Spores + Elvish Farmer + Carnival of Souls is infinite swamp. Any blood artist type card or Aetherflux Reservoir ... Or with Blade of the Bloodchief or Sadistic Glee on one of the creatures you can get Elenda to infinite size, sac her and make infinite swamps

Iâve got Teysa Karlov and so much other synergy in the deck, itâs really fun to play. With the above cards mentioned I want to add so much more, like Workhorse for example. But then you look at cards like Cathars' Crusade (with hangarback walker!) or Pitiless Plunderer to fuel the token creation, thereâs so many options..

I like the idea of giving it to someone else before making a million creatures :D. âWho wants infinite mana?!?â

Geralf's Messenger with Ashnods Altar and Ghave is a wincon that can produce infinite ... though everyone would be dead already. Unless they had a platinum angel, though Karlov of the Ghost Council would settle that.

Thereâs great potential in combination with Mikaeus, the Unhallowed as well.

Hey, one of the advantages of playing Fungus tribal are all the Fungi that put counters on themselves and remove them to make a Sap. You already have Doubling Season and Sporesower Thallid which are good, but consider expanding on the strategy of spore counters?

These two cards like Season put more spore counters on Fungi when they get a counter at your upkeep.

Consider including more two and three drop creatures who put a spore counter on themselves each upkeep and can use those counters to make a Sap (Mycon, Thallid, Farmer, Deathspore, Shel-Dweller, Germinator, Psychotrope, Vitaspore, etc.). These creatures can make a Sap simply by them just being on the battlefield getting counters. It costs no mana to put spore counters on them, no mana to make a token and it doesn't require another card to make a Sap, that's powerful.

Here's some budget suggestions ($1 or less):

You have a very solid base here that can lead to some really fun aristocrats gameplay. Depending on your budget, however, here are some cards to consider. I know some of these can be a bit pricey, but if you can afford them they make great inclusions. Bloodspore Thrinax Craterhoof Behemoth Elvish Farmer Mazirek, Kraul Death Priest Nemata, Grove Guardian Psychotrope Thallid Sporesower Thallid Tendershoot Dryad Cryptolith Rite Dictate of Erebos Parallel Lives Doubling Season Primal Vigor Grave Pact Dictate of Erebos

I know that's a lot of cards, and nearly all of them are over $1, some being over $10. Honestly though you don't need any of them, what you have here is really solid and you have all the correct includes for a saproling aristocrats deck. My suggestions only really come into play if you're willing to spend a lot on the deck, and I know what you have right now is pretty budget. Honestly the only card I would say you absolutely should run is Sporesower Thallid. It's inexpensive and helps your other fungi get their needed 3 spore counters. (or 2 if you have sporoloth ancient out.)

Stupidmole, really like the looks of Saproling Burst. I've just picked up a copy. Just need to make room for it now. I'll throw in Elvish Farmer if I feel like I need another sac outlet. Thanks!

PonchoLibre, thanks for your suggestions. I tend to shy away from infect in Commander. My playgroup is pretty laid back. If I went the infect route, I would probably go with Triumph of the Hordes since it would just be a one-turn thing.

I would suggest Saproling Burst for quick saproling generation. If you are looking for a cheaper alternative to doubling season, I would look at Primal Vigor as an alternative. For sacrifice outlets, Elvish Farmer is a fantastic outlet and synergises quite with Sanguine Bond as well as the other aristocrats effects in the deck.