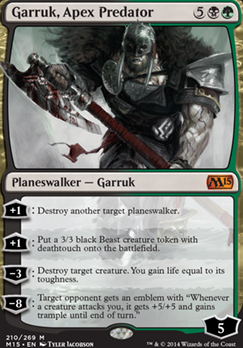 -3: Destroy target creature. You gain life equal to its toughness.

-8: Target opponent gets an emblem with "Whenever a creature attacks you, it gets +5/+5 and gains trample until end of turn."

I like this idea, but the main reason I'm commenting is because of you mentioning Primevals' Glorious Rebirth and Garruk, Apex Predator in a list of presumably "illegal" cards--those are both perfectly legal EDH cards, last time I checked ;)