-6: Destroy up to three target creatures and/or planeswalkers. Return each card put into a graveyard this way to the battlefield under your control. 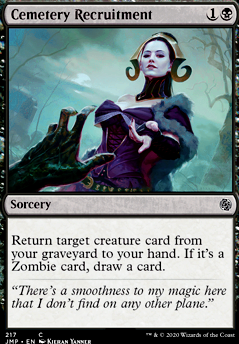 Gonna Bleed on You
by LensBlair

If I use Sorin, Lord of Innistrad to destroy Deepglow Skate and any two other planeswalkers, would the planeswalkers come back with double loyalty counters?

Putting it here in case itâs easier to remember: might want to swap Sorin, Vengeful Bloodlord for Sorin, Lord of Innistrad

I use Urge to Feed as a pseudo-destroy in the Vampire Deck I built alongside a friend for a special Halloween competition a few years back (it's called Sorin's Lifelink Legions on my profile if you want to take a look).

This could be an alternative to not using Go for the Throat as you mention in the description; plus it's a counter on any number of creatures you want in a Vampire build which can be used very strategically; particularly if you have any Vampire token-generation (which I see a little of, maybe could add some more with Sorin, Lord of Innistrad or something).

Nice to see some of those other recommendations from your other deck make this list though! Very solid choices and I see a lot of similarities in our builds even though the theme is somewhat different.

I don't know about this, but in situations where the card says "return to the battlefield (Athreos, Shroud-Veiled, Luminous Broodmoth, Sorin, Lord of Innistrad), would Kunoros, Hound of Athreos cancel that?