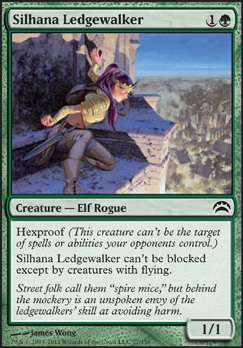 Silhana Ledgewalker can't be blocked except by creatures with flying.

Silhana Ledgewalker can't be the target of spells or abilities your opponents control.

The Badger's Your Friend, Make Love To The Badger
by m31plusus 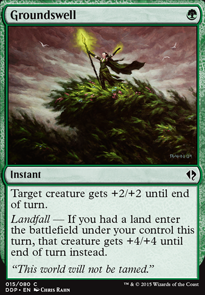 Enuma Elish // The Epic of Babylon

General_Pasta Yeah mate I totally pick up what you are putting down. It's a gamble to use mutate, admittedly, I added them in because Ikoria was the set where I first got into Magic, so I am quite the newbie. They were the first cards I bought so I really wanted them to work in a fun way. Mutating them on other creatures gives value as well, for example if you were to mutate Sawtusk Demolisher onto Cold-Eyed Selkie and you can easily draw tonnes of cards and have an extra removal on the table. Sometimes I also just like having my Paradise Druid be a mutate stick I fling all my dough onto. I used to have more such as Silhana Ledgewalker so I can amp her up and do unblockable damage with mutate but recently I've gone more the route of focusing just on Yidris.

As for your deck, I quite like it as well!!! I certainly admire the focus on the storm mechanic and using auras, I've seen a couple of those decks floating around and the appeal is definitely there. I don't think I'm the guy to give you a lot of advice but I think there is a lot of value in going the tried and true route, especially when this deck is so expensive. Thanks for your comment!!!